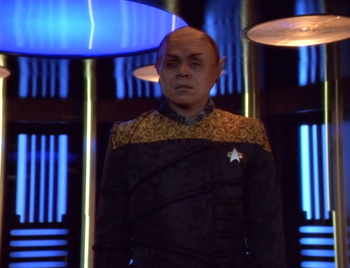 The mother of all Transporter Accidents.
"So at what point did he become an individual and not a transporter accident?"
Advertisement:

During an away mission on a planet where Lt. Tuvok and Neelix are looking for flower samples to collect, they are transported back to the ship after their mission is completed. Unfortunately, instead of two people beaming back on board Voyager, there is only one appearing in the teleporter room...a strange humanoid combination of both Vulcan and Talaxian. The Doctor discovers that both Tuvok and Neelix have somehow merged together while they were in transport, and the agent of this merging was one of the plant samples that they were bringing back to Voyager with them.

While the Doctor tries to find a way to undo the merging, the new individual formed from the merging who calls himself Tuvix gets used to the dual roles and memories that he possesses of his "parents". Unfortunately, when the Doctor finally finds the way to undo the merging, Tuvix objects against the procedure, equating it to murder of a new life form. But because the crew wanted Tuvok and Neelix back to the way they were before the merging, Captain Janeway acts against what Tuvix wants and initiates the unmerging procedure herself, restoring Tuvok and Neelix to their normal separate selves.