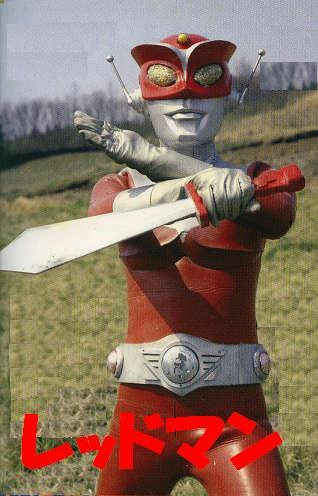 Redman is Japanese tokusatsu series consisting of 138 five-minute shorts produced by Tsuburaya Productions, the makers of the Ultra Series, which the series is a spin-off from. It was broadcasted through 1972 as a segment on the Japanese children's variety show Ohayo! Kodomo Show on Nippon Television.

This super, super low-budget series is quite simple in premise. Every episode the titular character would battle one or more different kaiju (usually monsters from the Ultra Series) in a location-shot backdrop like a quarry, woodlands or a field. Redman would encounter his monstrous opponents wandering about and begin to engage in combat with them, always ending with the monsters defeated (often in a brutal manner). And yeah, that's pretty much every single one of the 138 shorts.

Now normally, a series like this would have faded into obscurity long ago, but in 2016 Redman experienced a resurgence of memetic levels. You see, Tsuburaya Productions began uploading episodes onto their official YouTube channel that year and they caught on around the Internet's Ultraman fandom by storm due to the sudden and violent natures of the battles and their No Budget production values making them highly entertaining with the right mindset and making it seem as if Redman was a crazed monster-murderer instead of an Ultraman-esque superhero. TsuPro seems to have caught on to this as well, because in 2018, the series was given an American Comic-Book Adaptation illustrated by big-name Godzilla artist Matt Frank that frames the violence from the kaiju's perspective. The Redman comic now has its own trope page.