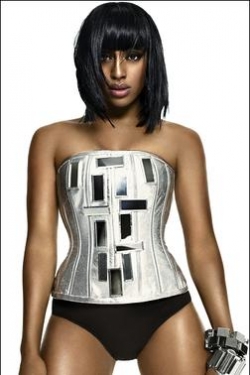 Alexandra Imelda Cecelia Ewen Burke (born 25 August 1988)(that's "Alex" to you) is an English pop singer, songwriter, dancer and sometime model. After winning the UK version of The X Factor in 2008, she released the number-one album Overcome, which spawned four number-one singles.

Three years and one Updated Re-release later, she released her sophomore effort, Heartbreak on Hold. Despite buying into the electro-dance craze, it didn't fare as well on the charts, reaching number eighteen despite a number three single in "Elephant". A little while after the album's release, she parted ways with both her former record label and her management, and stated that she will return to her pop-R&B roots for her third studio album.