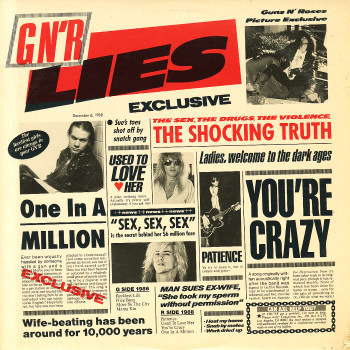 She bitched so much, she drove me nuts
And now I’m happier this way
Guess I needed sometime to get away
I needed some peaece of mind
Some peace of mind that'll stay
So I thumbed it down to nine o six ten L.A.
Maybe a Greyhound could be my way
—"One in a Million"
Advertisement:

The first half of the album consists of tracks from the EP Live ?!*@ Like a Suicide, which is basically a studio EP with the audience recordings taken from a 1970's rock festival. "You're Crazy" was originally released on Appetite for Destruction, and was re-recorded acoustically (as originally intended) for this album.

I said woman, list some tropes, it'll work itself out fine...

I've been walkin' the street at night
Just tryin' to get it right
Hard to see with so many around
You know I don't like being stuck in the crowd
And the streets don't change, but maybe the name
I ain't got time for the game
'cause I need you, yeah yeah, but I need you
Oh, I need you
Whoa, I need you
All this time