Music / Use Your Illusion 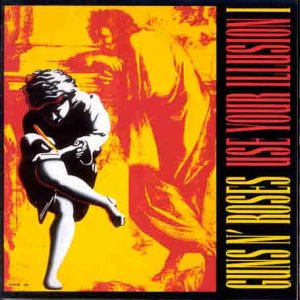 Livin' right next door to hell, why don't ya write a letter to me? 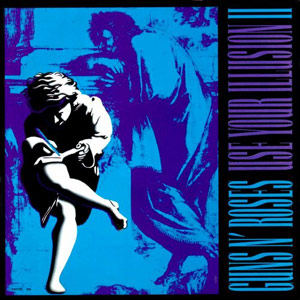 A would-be philosopher clearly believing his own hype.
When you're talkin' to yourself, and nobody's home
You can fool yourself, you came in this world alone
(Alone)

So nobody ever told you baby
How it was gonna be
So what'll happen to you baby
Guess we'll have to wait and see
—"Estranged"
Advertisement:

Use Your Illusion I and Use Your Illusion II are the third and fourth studio albums recorded by American Heavy Metal band Guns N' Roses. They were released simultaneously through Geffen Records on September 17, 1991.

A set of three songs with similar themes, and epic music videos to match, became known as "the Illusions trilogy": "Don't Cry", "November Rain", and "Estranged".

Rock fans tend to be a bit polarized about the whole thing. A lot wish that the band had gone with Slash’s vision and released one album with all the best songs on it rather than two albums with more variable quality songs included.

Use Your Illusion debuted to widespread critical praise despite some complaints about Filler. In a reversal of Appetite's fortunes, the followups fell off both critically and commercially after Nirvana helped revive interest in simpler rock styles, setting up the predominance of Alternative Rock throughout the decade. In the wake of the grunge explosion, Use Your Illusion took on a dual existence as success and punch-line, continuing to release successful singles and iconic videos even as it became a symbol of a self-seriousness popular music now aimed to avoid at all cost.

Use Your Illusion also marks the debut of keyboardist Dizzy Reed (who is still in the band today), and drummer Matt Sorum. The latter replaced the fired Steven Adler, who only appears on "Civil War". Furthermore, Use Your Illusion II turned out to be the last album recorded with Izzy Stradlin, who quit the band shortly after release. He would be replaced by Gilby Clarke.

The two albums combined for a total of seven singles. I produced "Don't Cry", "Live and Let Die", and "November Rain". II produced "Knockin' on Heaven's Door", "Yesterdays", "Civil War", and "Estranged". While "Estranged" did not chart in the US or UK, the first five singles were all Top Ten on the UK pop chart ("Civil War" peaked at #11); and the first four were Top 40 hits on the Billboard Hot 100, with "November Rain" peaking at #3.

An abridged compilation album—featuring 12 songs drawn from both albums, and censored for retailers that refused to sell the original versions due to explicit lyrics—was released on August 25, 1998.

Tracklist (Use Your Illusion I):

Tracklist (Use Your Illusion II):

What's so civil about tropes, anyway?