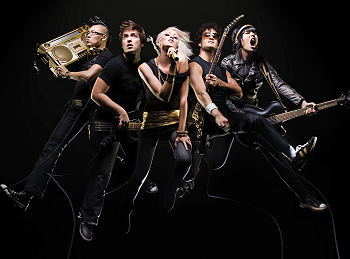 From left to right: Max, Matt, Tricia, Dave and Melissa.
Superchick (or Superchic[k]) is an American Christian Rock band formed in 1999. They strive to be positive female role models, without needing to tell you to stop being feminine or glamorizing misandry in their music.
Advertisement:

The group has released four studio albums, and two remix albums, over the course of nine years. They disbanded while working on album number seven, which has been modified to be their final effort, with a release date of October 2013.