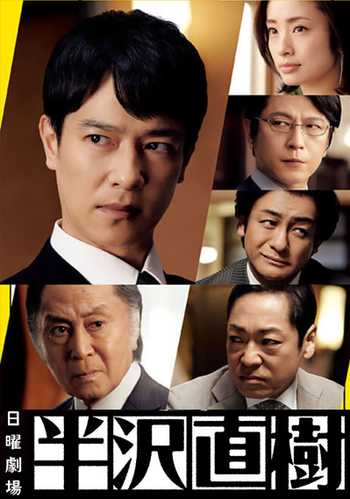 "I believe in people's good will. But if anyone wronged me, I'll pay them back twofold! That's how I do things."
Advertisement:

Hanzawa Naoki (半沢直樹) is a 2013 Japanese television series, originally aired on TBS and based on the series of novels of the same name by Jun Ikeido (池井戸潤), himself a former banker in the 80s and 90s.

The series follows the story of Naoki Hanzawa (Masato Sakai), a banker who works for Tokyo Chuo Bank, as he climbs the career ladder while exposing the wrongdoings of his corrupt superiors and protecting the livelihood of the common people. A good and incorruptible man, he is nevertheless merciless to those who wronged him, vowing to pay them back twofold (or more) and takes great pleasure in making them literally kneel and beg for forgiveness.

It is the most-watched series in Japan with the highest rating in three decades of Japanese television drama, and is also hugely popular in Taiwan and Hong Kong.