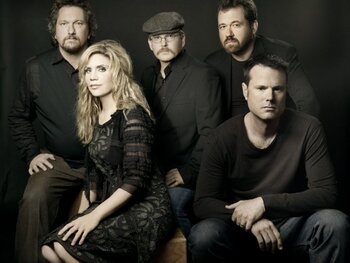 Alison Krauss & Union Station (sometimes abbreviated AKUS) are a contemporary bluegrass band who are one of the best-known and most popular groups in the genre. Fronted by singer-fiddler Alison Krauss and propelled by her distinctive voice (breathy on lower notes, with a pure, clear soprano in higher registers), the group has won 27 Grammys and almost 30 various other awards. They started out playing mostly traditional bluegrass, but by the time of their first major label release Two Highways, they had begun to branch out, recording a bluegrass version of The Allman Brothers Band song "Midnight Rider". As their career progressed, the band continued to explore other forms of music, recording bluegrass covers of everything from 1970s British soul songs ("Baby, Now That I've Found You"), to classic Disney standards ("Baby Mine").

They first gained national attention with a cover of the late Keith Whitley's signature song "When You Say Nothing At All", which hit #3 on the Billboard Country Music chart in 1994. The group was also one of the only bands (the most notable other example being Splendid) to have their music featured in multiple episodes of Buffy the Vampire Slayernote ("It Doesn't Matter" in season 2's "When She Was Bad", and "That Kind of Love" in season 6's "Entropy") It was immediately followed by Krauss guesting on Shenandoah's single "Somewhere in the Vicinity of the Heart".

The band underwent numerous personnel changes in its early years, but the current lineup has been together since 1997's So Long So Wrong, with Ron Block and Barry Bales having been around even before that, since 1992. In addition to the group's releases together, guitarist Dan Tyminski provided the singing voice for George Clooney in O Brother, Where Art Thou?, while Jerry Douglas has released more albums on his own than Union Station as a group.