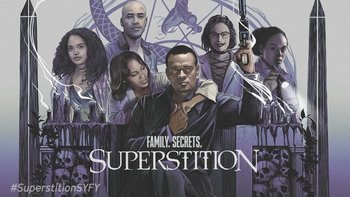 Superstition is an American television drama series that was commissioned by Syfy with a 13-episode direct-to-series order in December 2016.

The show premiered on October 20, 2017, with Netflix holding international airing rights.The series is set in La Rochelle is a town in the Deep South where superstitions, ancient myths, and legends are true. For generations, The Hastings Family have owned the only funeral home and graveyard in La Rochelle. In addition to providing services for all faiths, the "family specialty" is handling "afterlife care" for the unexplained deaths of folks at the hands of demonic "Infernals," and other unworldly phenomenon that have long haunted the town.

The series contain examples of: