Series / The Men Who Built America 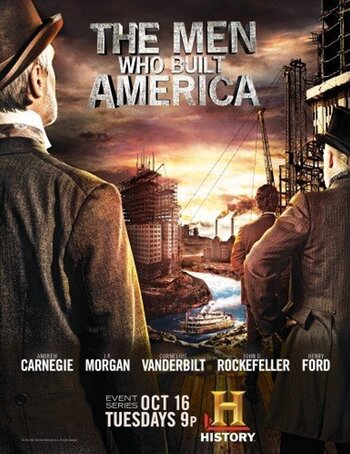 An eight-part miniseries which aired on The History Channel in late 2012, chronicling the explosive industrial development of the United States in the latter half of the 19th Century, and the men who drove it, and in the process, created the American national character.

For better or for worse.

The series begins immediately after the end of The American Civil War, with the United States recovering from the most destructive conflict it has ever seen. There is a need to rebuild, to create an infrastructure that will strengthen the nation. And where there is a need, there is an opportunity, for the savvy entrepreneur. A opportunity to help develop the country, and get filthy stinking rich in the process. The series begins with the development of the rail industry, and the first great industrialist, Railroad Baron Cornelius "The Commodore" Vanderbilt, who grew wealthy through a combination of business acumen and some plain old dirty tricks, and who consequently set the standard for the giants of industry who would follow.

As the series progresses, it focuses on the rivalry between oil tycoon John D. Rockefeller and steel magnate Andrew Carnegie, men who were very much polar opposites in background and personality and soon found themselves clashing in their quest to be the Richest Man In The World. Meanwhile, as Rockefeller and Carnegie build empires out of virtually nothing, the son of a New York banking family, one John Pierpont Morgan, wants to do the same, creating an innovation that will revolutionize the modern world (and make him a ton of money). He funds an inventor by the name of Thomas Edison, who promises great things with this "electric light" thing he's working on. Which in turn puts him in conflict with Rockefeller, who has a virtual monopoly on artificial lighting thanks to his control of the domestic kerosene supply. And Edison's insistence on sticking with the low-voltage Direct Current delivery method - as opposed to the higher-voltage-but-potentially-more-dangerous Alternating Current method - triggers a full-on war between himself and one of his former protégés, some weirdo by the name of Tesla...

As the 19th Century marches on, fortunes rise and fall, the rich get richer, and the poor get poorer, until the struggle turns into a political one. Organized labor causes problems in Carnegie's steel mills, and eventually the Populist orator William Jennings Bryan emerges to challenge the control of these powerful businessmen for the soul of the country. Rockefeller, Morgan, and Carnegie put aside their differences for a brief period, to back a Presidential candidate - William Mckinley - who will be more receptive to their influence. And when some minor New York moderate Republican starts voicing the same sort of anti-business opinions, they decide to boot him upstairs and make him Vice President. What Could Possibly Go Wrong?

As the 19th Century draws to a close, these Captains of Industry find themselves facing the new anti-trust politics of the Progressive Era, and their almost absolute power and authority in American capitalism in jeopardy. And some eccentric engineer by the name of Henry Ford has an idea for a new kind of automobile, one that could be made cheaply and quickly in large quantities, making car ownership no longer just a novel luxury for the super-rich, but an attainable commodity for all Americans.

The series tells its tale with broad strokes, mostly through dramatizations, and obviously some liberties are taken and some important historical things are omitted or glossed over. The narrative is punctuated by commentary by historians, scholars, and some modern-day entrepreneurs like Donald Trump, Mark Cuban, and Russell Simmons, who offer some insight into the mind of the businessman. The series produced two spinoffs The Men Who Built America: Frontiersmen and The Food that Built America

Tropes featured in the series include: