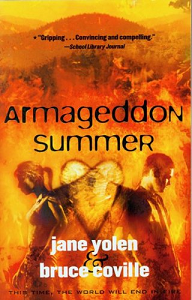 A collaborative Young Adult novel by Bruce Coville and Jane Yolen written in 1998.

Two teenagers, Jed and Marina, have little in common beside the fact that their parents have joined a cult that believes that the world is about to end on July 27, 2000. All the families in this cult (called The Believers) have made a camp at the top of a mountain to wait out the Apocalypse.

There are, of course, problems. First, the apparent apocalypse is on Marina's birthday. The camp closed off after a certain number of people come in, leaving Believers who didn't get in to desperately protest outside the gates alongside non-Believer family members concerned about those who did make it in. And (of course) Jed and Marina are starting to fall in love.