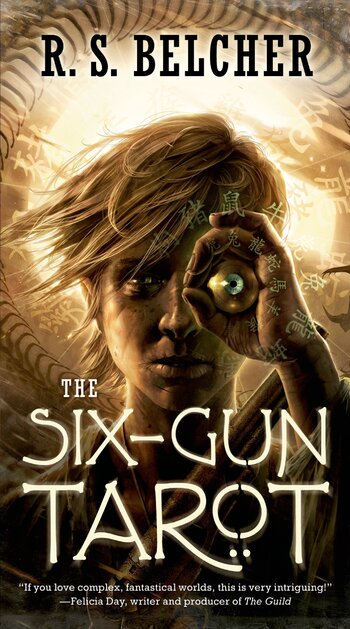 The Golgotha Series is a series of Weird West novels by R.S. Belcher.

Golgotha is a town in Nevada a bit more unusual than most. They say that the sheriff is a living dead man, who can't die again, and that his deputy is kin to the coyotes in the desert. Everyone in town seems to have secrets: the mild-mannered housewife who is a member of a secret order of pirates and assassins; the unnerving taxidermist who pursues forbidden sciences with the intention of conquering death itself; the mayor who struggles with his faith even as he presides over a vault of sacred Mormon religious artifacts; and the ruthless businessman who may be more than human.

For fifteen year old Jim Negey, on the run from a murder charge in West Virginia, it seems a fine place to go to ground. Maybe he'll be able to find some answers about his father's false eye, an emerald stone passed down to him by Chinese mystics which holds a mysterious power over the spirits of the dead. But his arrival in the town happens to coincide with dark happenings. An ancient evil has awakened at the bottom of the town's played-out silver mine, and the town's residents must overcome their suspicion and distrust of one another and unite if they wish to survive.

The books were adapted into audio plays by Graphic Audio.

open/close all folders
Series Wide
The Six-Gun Tarot
Advertisement:
The Shotgun Arcana
The Queen of Swords
The Ghost Dance Judgement