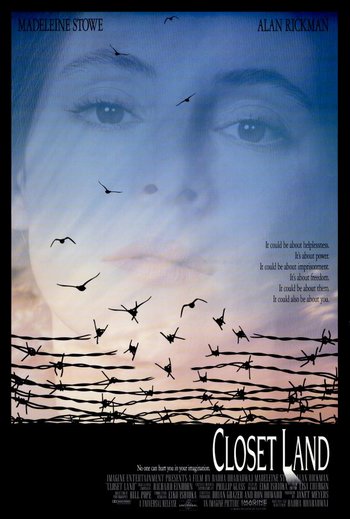 Closet Land is a 1991 dystopian drama film written and directed by Radha Bharadwaj, starring Madeleine Stowe and Alan Rickman. They are the only people who appear in the movie, and their characters are never named (although Stowe's character is given a codename, AB234).

An author of children's books (Stowe) is detained by the totalitarian government of an unnamed country and accused of inserting secret, subversive political messages into her latest book, Closet Land. The book is about a little girl who is put into the closet by her mother as punishment while the mother goes out, and imagines the clothes hanging there to be her friends. When her mother is about to come home, 'The Friendly Rooster' will crow, and the girl will put the clothes back in their places.

She is brought before a ruthless interrogator (Rickman), who uses escalating mental and physical torture and elaborate lies to force the author to admit that her book is really hidden antigovernment propaganda aimed at children.