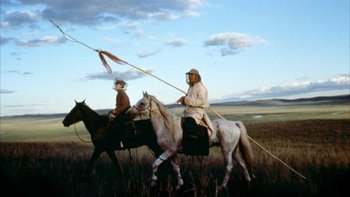 Close to Eden (in Russian "Урга", Urga) is a 1991 film from the Soviet Union (right before it dissolved), directed by Nikita Mikhalkov.

Gombo is a Mongolian sheep herder and nomad, who lives with his mom, wife, and three children in a yurt in Inner Mongolia. (That is, the Chinese province of Inner Mongolia, not the independent nation of Mongolia). His is a simple existence on the treeless steppe, although lately he's bothered by his wife Pagma's refusal to have sex—she's very fertile and she's reluctant to get pregnant again and give the family another mouth to feed.

One day a Russian truck driver named Sergei, who is working to build a road in the province, falls asleep at the wheel of his truck. The truck veers off the road and eventually gets stuck in a stream near Gombo's yurt. Despite not really being able to understand each other, the two men form a friendship.