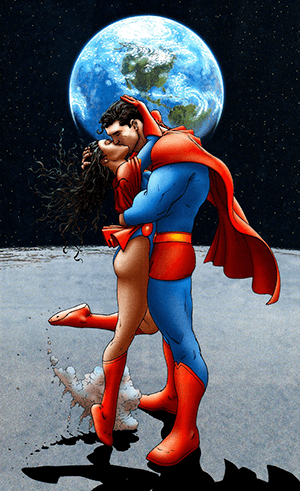 Superman and Lois sharing a very quiet moment.
"Lois and I have an appointment in Poseidonis at 8:30 Mid-Pacific time."
— Superman, All-Star Superman
Advertisement:

On a Superpowered Date, a character with access to extraordinary powers of some sort uses these abilities to take a current or potential romantic partner on an extraordinary evening out. Why settle for dancing in the moonlight when your Superpower Lottery winner lover can take you dancing on the moon? (With no pesky asphyxiation!) The powers can be of any nature, so long as they go beyond what a Muggle in the setting can do, and do not need to be innate - effects granted by magical artifacts or highly advanced technology qualify.

A Superpowered Date is often a Grand Romantic Gesture, and one that's hard to outshine when it's pulled off well. For this reason, it can be a powerful tactic for impressing potential partners - at the very least, it should get their attention. It can also be considered the G rated counterpart of Power Perversion Potential.