Spoilers abound!! Read at your own risk.

"All according to my calculations." 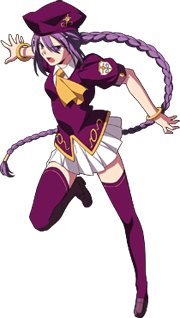 Sion is an Alchemist of Atlas, a magic organization in Egypt independent of the Mage's Association. According to her calculations, Tatari is going to manifest in Misaki. Bearing a grudge against the mysterious vampire, she came in an attempt to kill him. She quickly meets up with Shiki and commences the first battle of the story. Following that, she and Shiki track down the mysterious Tatari, but she eventually lies and says they have defeated him before they really have managed to do so. Shiki catches on and they eventually face Tatari in battle where, with the assistance of Arcueid, they finally manage to destroy him for real.

The reason for her grudge against the Tatari is rooted in a failed attempt by the Church to kill him at an earlier time. However, the rest of the group was killed, including her friend Riesbyfe Stridberg. Sion was only spared because Tatari realized she was a descendant of his, so he merely drank her blood. Due to the nature of the Tatari, she has yet to fully vampirize and intends to kill him before this can happen.

Vampire Sion/Sion TATARI is story-wise an Alternate Continuity where Sion has succumbed to her vampiric impulses and is on the verge of succeeding Wallachia as the new TATARI. Despite this she can still fight her normal self.

"I don't care for whatever plans you have for humanity, just give Onii-chan back!" 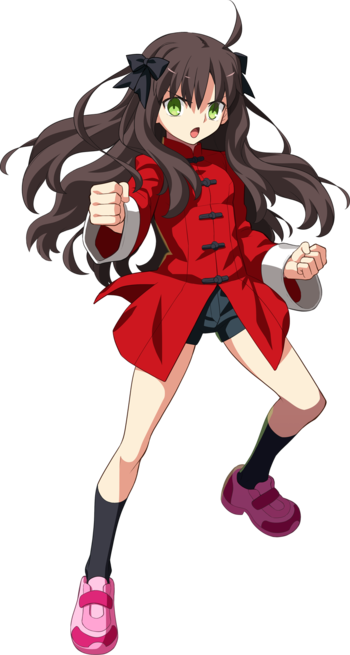 Miyako is Shiki's much younger sister from the Arima family. She rarely talked with Shiki, so he assumed she didn't like him. In fact, the opposite was true: she loved him very much, but was shy so she couldn't approach him. Instead, she would get embarrassed, tackle him, and then run away. She views the Tohno family as having 'kidnapped' Shiki and goes to 'rescue' him. She has a fascination with Chinese martial arts, and Wallachia increased her fighting ability. She was mentioned briefly in the original Tsukihime and Len was mistaken for her in Kagetsu Tohya, but she did not receive a proper introduction until Melty Blood.

One of the two protagonists of the spinoff manga Hana no Miyako. 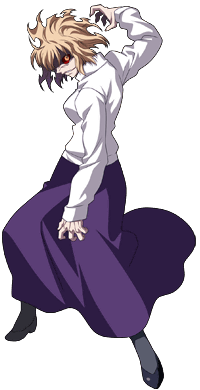 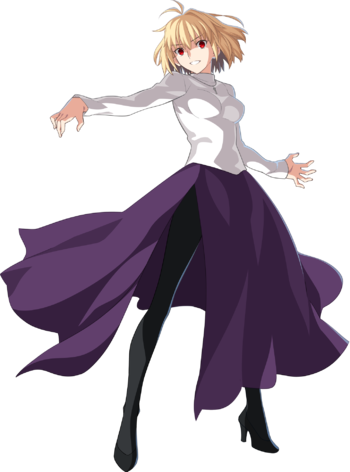 Red Arcueid is a hypothetical Arceuid that has given into her bloodlust created by Wallachia. However, because Arcueid is such a powerful being, she is limited to one third of her normal power. Red Arcueid is completely bloodthirsty and insane with absolutely no value for life.

In Type Lumina, Red Arcueid is instead Arcueid herself, having cast aside reason and emotion to give in to her darker impulses. 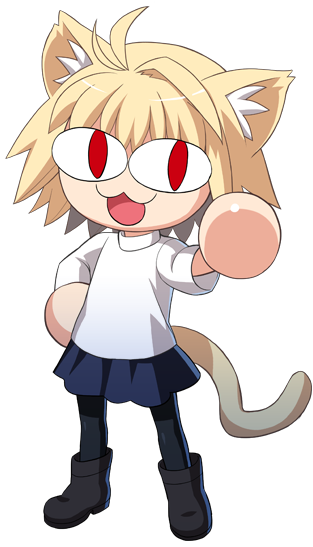 Neco-Arc (Neco for short) was originally nothing more than a chibified Arcueid that would appear to harass Ciel in the Tsukihime hint corner Teach Me Ciel-Sensei. This trend continued into Kagetsu Tohya, but in Melty Blood she became a fully fledged character. As you can probably guess from her appearance and origins, she is not the most serious character around. In Carnival Phantasm, she is the owner and main bartender of the Ahnenerbe Cafe. 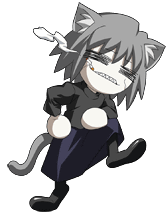 Similar to Neco-Arc, he is a parody of Nrvnqsr "Nero" Chaos, and possibly Joji Nakata for that matter. He wants to be an actor, but never seems to be able to make it. 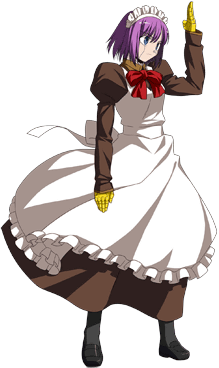 Mech-Hisui (Mech for short) is a robotic version of Hisui created by Kohaku, most likely while under the influence of Wallachia. Her duty seems to be to guard the Tohno Mansion from intruders, of which there are a large amount. It's revealed that Kohaku had built an entire factory that mass produces these units. 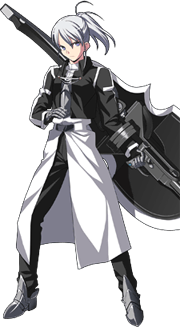 Riesbyfe was a Church Knight and a close friend of Sion before dying at the hands of the Night of Wallachia in the incident that infected Sion with vampirism. However, her soul remained alive and intact within the TATARI as data, due to the True Apocrypha's protection. Sion was able to steal this data from Wallachia during their fight, prior to his death at Shiki's hands. Dust of Osiris used that same information, alongside the Aqua Vitae, to resurrect Riesbyfe. Despite having been recreated through the TATARI, Riesbyfe was completely alive and completely human. After Osiris' defeat, Sion stole Osiris' program and maintained Ries' existence herself, at the expense of two Thought Partitions. Riesbyfe's playable story arc takes place in the Vampire Sion timeline; although she is present in the "main" Sion timeline as well.

"I see... you're definitely some kind of imitation." [said to Shiki Tohno]

Shiki Ryougi from The Garden of Sinners makes a special appearance in Melty Blood: Actress Again. For a proper writeup, please consult the The Garden of Sinners characters page. Shiki is explicitly stated in Melty Blood to have come from another universe, most likely because she and Tohno Shiki do not exist in the same universes. She was apparently brought there by Archetype: Earth, and her story mode ends with the two of them starting to fight. 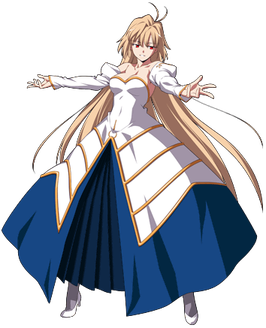 Archetype: Earth is a playable character in Current Code. She is a fragment of Arcueid's subconscious who decides to wake up and take over during the duration of the game. She essentially represents Arcueid at her most powerful, her original form before her fall due to Roa's actions. 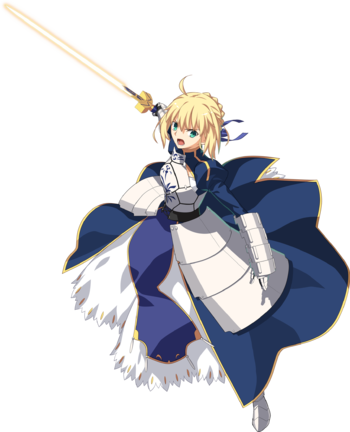 Altria Pendragon. King Arthur. King of Knights. The wielder of the holy sword Excalibur. She is one of main heroines of Fate/stay night, so for a proper writeup, please check her character page. She makes a special appearance in Type Lumina, hailing from a parallel world and called here without a proper Servant summoning ritual. She is now searching Souya to find an answer to her sudden appearance. 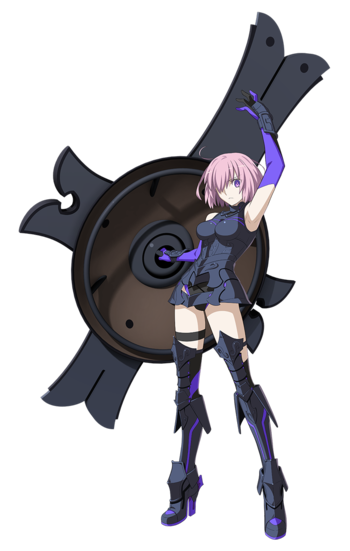 A girl working for Chaldea Security Organization, a magical agency created to protect the Human Order. She is known as a Demi-Servant, a living person who has been merged with the soul of a Heroic Spirit, transforming her into a Shielder-class Servant. For more information about her, please check this page. Mash joins the Type Lumina roster as a special guest in the second wave of DLC, being summoned here when one of Chaldea's Rayshift operations goes haywire.

The TATARI is one of the more bizarre Dead Apostles out there and the thirteenth Dead Apostle Ancestor. While not particularly powerful on his own, the nature of his existence makes him almost impossible to track down and completely impossible to destroy through normal means. The reason is that in one sense there is no TATARI at all, only a recurring phenomenon on par with a hurricane. It merely appears for a single night every few decades. The name Night of Wallachia comes from one of its earlier manifestations not long after the death of Vlad the Impaler, who was already falsely being thought of as a vampire. Due to the TATARI's nature of manifesting itself as the fears of the populace, it appeared as what Vlad would be if he really were Dracula and slaughtered the village.

Due to her grudge against him for both killing her friend Riesbyfe and partially vampirizing her, Sion has managed to track down where he is next to appear, thus setting in motion the events of Melty Blood. It is said that TATARI will not die until the Crimson Moon once again appears in the sky, which will not occur for another thousand years.

Although he has a number of fates in the original Melty Blood, canonically the Night of Wallachia ends abruptly when Arcueid channels Crimson Moon Brunestud, announces that even in a thousand years Zepia will not succeed in making his miracle, and pulls the Crimson Moon from the future to turn him back into his vulnerable vampire form. He is then killed by Sion and Shiki. Despite this, due to the meddling of Aoko and White Len he appears as an avatar of his former self in later Melty Blood games, though he is still dead. 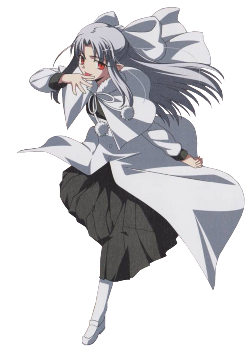 White Len is a version of Len created by Aoko Aozaki from the remains of Wallachia after he was defeated. She is said to made up of unused parts of the original Len, including both actually speaking and many of her repressed unhealthy emotions.

The Dust of Osiris

The Dust of Osiris is the Big Bad and Final Boss of Actress Again. She is the TATARI of a possible future created from the portion of Sion's blood that Wallachia stole from her. It is effectively Sion as she would have been had she returned to Atlas and never met Shiki and is a Well-Intentioned Extremist. Having decided that humanity could not be saved, she hoped to utilize the Unified Language, as well as a distorted space caused by the Crimson Moon's Time Travel to convert all life into data and store it in her supercomputer, Hermes, leaving behind a record of their existence, at least giving the lives of humanity significance. In all endings where she is fought she is defeated and vanishes, except in V. Sion's where V. Sion absorbs her power and becomes the new TATARI herself.