WARNING! Not only is Saber's true identity a major part of how and why her character is the way it is, the very existence of Saber Alter in and of itself is a major spoiler for the Heaven's Feel route, not to mention her general Late-Arrival Spoiler status from Fate/Grand Order. As a consequence, literally everything on this page will be Spoilers Off.

Voiced in Japanese by: Ayako Kawasumi 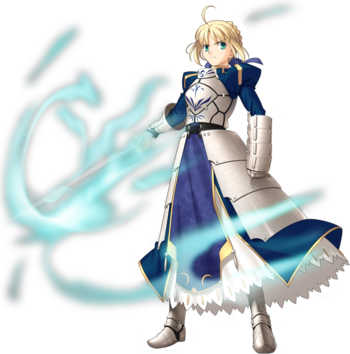 "I ask of you, are you my Master?"
"There are no regrets. If one can be proud of one's life, one should not wish for another chance."

Saber is the focus and Love Interest of the Fate route, as well as playing a major role in Unlimited Blade Works. Saber is the Servant summoned by The Hero, Shirou Emiya. Being a Saber class, she excels in many areas of fighting and has a very high magic resistance. Sabers are widely considered the best Servant class, but due to Shirou's shortcomings as a Master, she cannot reach her full potential. She has a hard time getting along with Shirou and clashes over his desire to protect her life over his own, but shares his dedication towards honorable and just ways of fighting.

Her Noble Phantasm is the most famous Cool Sword of them all: Excalibur, a Wave Motion Sword that she makes invisible with the barrier magic Invisible Air as a means of concealing her true identity. 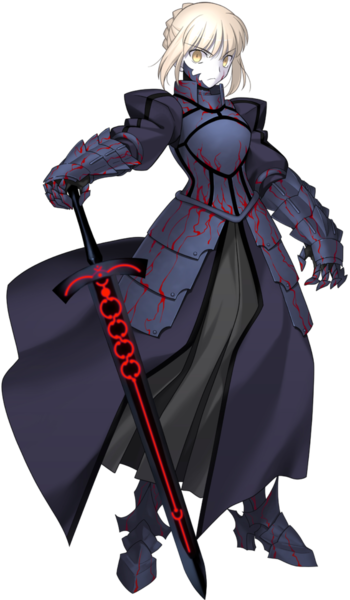 "Don't try to earn my favor. Even if my retainer dies, even if people suffer, I am a woman who feels nothing."
"Useless...! That Noble Phantasm cannot match me!"

Saber Alter is the corrupted version of Saber, who becomes a minor antagonist in the "Heaven's Feel" route. She is exposed to "All The Evils of The World" through contact with the Shadow, stripping her of her free will and transforming her into an apathetic puppet of Aŋra Mainiiu. Her stats are greatly boosted in this form, leading some to call her "the strongest Servant".

She has returned in the sequels and spinoffs like Fate/hollow ataraxia, Fate/unlimited codes, and Fate/Grand Order.