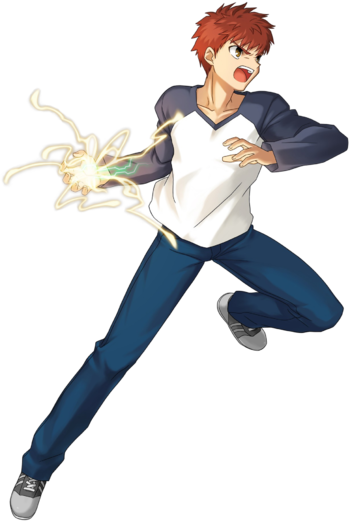 "If you walk down the path that you believe is right, you cannot be wrong."
"I don't want to regret anything. I want to make all the tragedies that happened into meaningful things by believing that my path is right."

The protagonist of the series, Shirou is a rather untalented Magus whose only skill is basic Tracing and Reinforcement magic, which allows him to analyze the physical make-up of an object and then strengthen it. His dream is to become a "Hero of Justice", someone who can selflessly protect the lives of everyone from disaster. He inherited this dream from his adoptive father Kiritsugu Emiya, who had given up on it. He is not really sure what it takes to reach that ideal.

At the beginning of the story, he possesses a Healing Factor that makes him practically immortal, though the source of this is unknown and he did not have it before. Shirou is also an accomplished archer as a side effect of his mage training and, following some training from Saber, is mildly proficient in swordplay.