Warning! As Servant identities are quite strongly tied to most of the characteristics of Servants, everything relating to a character's specific identity will be left unmarked. All other spoilers, such as for the story or Fate-specific character details, will be marked as necessary. 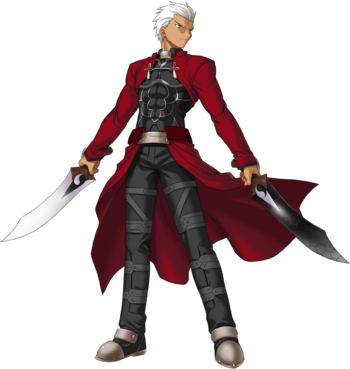 "Atone for my sins?! I have no sins to atone for, nor have I forced such a meaningless concept on anyone."
"Do not think about other things, there is only one thing you can do. So master that one thing. Do not forget. What you must imagine is always that you, yourself, are the strongest. You do not need outside enemies. For you, the one you have to fight is none other than your own image."

Archer is the Servant of Rin. Sarcastic but well intentioned, he tends to look down on Shirou's ideals and usually dispenses either cryptic advice or razor-sharp putdowns. He is obedient to Rin, although to what extent nobody really knows; Though he does as she asks, he seems to enjoy pissing her off to the extent that she wasted one of her three Command Seals giving an order she knew would have little effect.

His summoning was botched and as a result of this he claims not to remember his Noble Phantasm or true name. Instead, he fights primarily with dual short swords known as Kanshou and Bakuya despite supposedly being an Archer.

Archer has a big impact in all three routes, but Unlimited Blade Works is the route in which he takes center stage. Archer's true identity is unknown for a large portion of the story, due to claiming to have amnesia. 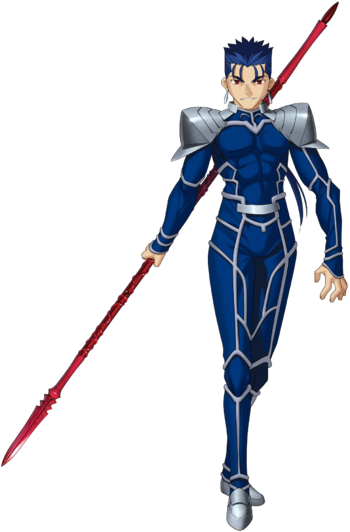 "It should be natural for you to drink until dawn with someone you get along with, even if he may be your enemy."

Lancer is a carefree, laidback Servant always eager to get into a good fight, and will never back down unless commanded. When not being an enemy, he shows a playful attitude and loves to tease. He is most often seen fighting Archer throughout the whole story. Although easy to dismiss as being a mediocre Servant, he is in fact extremely fast and skilled in the use of the lance.

His identity is revealed early on as one of the greater heroes of Irish Mythology, Cu Chulainn. Thus, his Noble Phantasm is easily guessable: The Gae Bolg, which kills its target instantly by automatically piercing the victim's heart and then reversing cause-and-effect to create a reason for it. 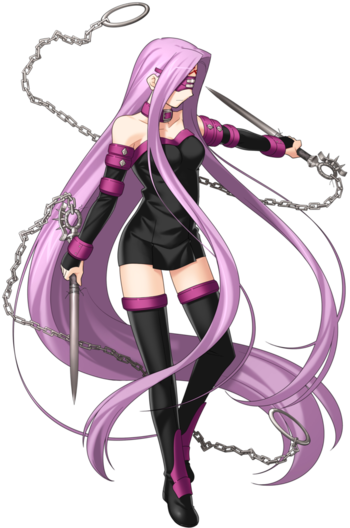 "You appear to be a brave person, unlike my master. I shall kill you kindly."

Rider is a tall, dark, silent and gorgeous Servant controlled by Shinji Matou. Rider is always seen with a blindfold and very long hair. Unlike Shinji, she is a little amiable; in fact, she dislikes him and considers him to be a coward. She wields a very long chain in battle with spikes on the ends. These chains make sounds like slithering snakes. However, because Shinji is not a magus, he greatly holds back her true potential, making her one of the weakest Servants.

Because she is so quiet and her Master is so difficult to deal with, she remains quite mysterious until the third route when she begins receiving more focus, which is also where her true identity, the Gorgon Medusa, is revealed. 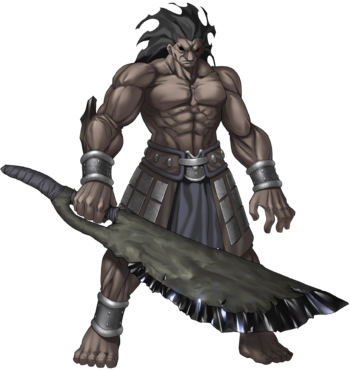 A very huge and very un-Gentle Giant: The mad Servant Berserker. This is the Servant of Ilyasviel von Einzbern, who immediately invoked the "Mad Enhancement" skill exclusive to Berserkers to strip him of his sanity and speaking ability in exchange for extreme boosts to all his stats. Despite his bouts of insanity and the Berserker class' reputation of killing their own Masters, Berserker is entirely loyal to his Master.

His identity, immediately told by Ilya, is in fact Greek Mythology's World's Strongest Man and all around badass: Heracles. Due to his wide range of talents, Heracles could fulfill the role of any of the seven Classes except Caster. Unfortunately, he was summoned as a Berserker and is unable to use his Noble Phantasm Nine Lives or the Bow of the Hydra. Despite this, his ludicrous speed, strength and resilience make him easily the most powerful Servant summoned to fight in the Fifth Holy Grail War. 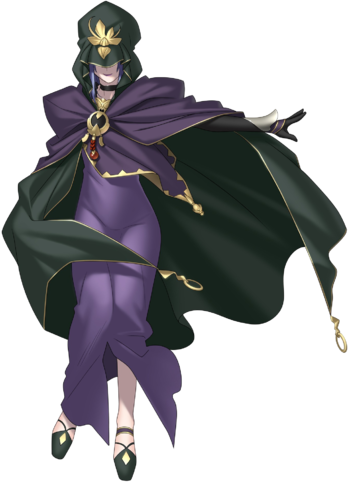 Caster with hood
Click here to see Caster without her hood 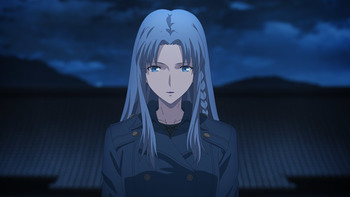 "If the Holy Grail has infinite wealth, it should not run out no matter how much we split it. Then can you not share the Holy Grail with those you trust?"

A mysterious wizard operating out of the local temple. Caster is a heretic who has made a personal enemy out of Tohsaka due to her draining the townsfolk of mana and nearly killing them in the process. She is ruthless, talented and determined. Assassin guards the gate of her base of operations and is her Servant. Despite this, she shows a level of interest in all of the protagonists and desires to take Saber for her own.

Caster is one of the physically-weakest Servants and relies mostly on her powerful anti-Army magic, her Territory Creation skill and her skeletal golems when fighting her opponents. She does less well in single combat. Her true identity is Medea, a famous witch from the Greek era. 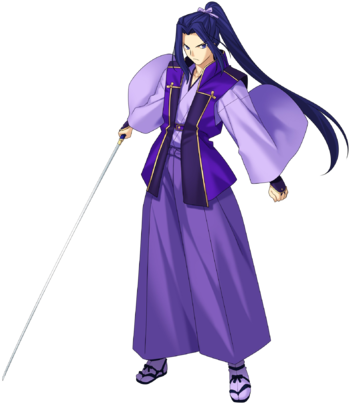 "My role is to guard this gate. I won't let you through alive, nor shall I let you out alive."

A Servant summoned by Caster to guard the gate of the Ryuudou Temple. Assassin is a solemn character who delights nothing more than having a good fight. As a result of being summoned by another Servant he is, however, an incomplete or fake Servant, thus he is linked with the gate and cannot travel further than the areas in the vicinity of the gate.

Assassin freely identifies himself to any opponent as the legendary swordsman Sasaki Kojiro. He is very different from normal Servants, and as such doesn't really have a Noble Phantasm. The closest thing that could be called his Noble Phantasm is Monohoshi Zao (lit. The Laundry-Drying Pole, a derogatory nickname that almost literally means "Really damn long sword"), a simple nodachi, and his ultimate technique, Hiken Tsubame Gaeshi (lit. Swallow Reversal Technique), a sword technique that allows him to strike multiple points at the same moment. 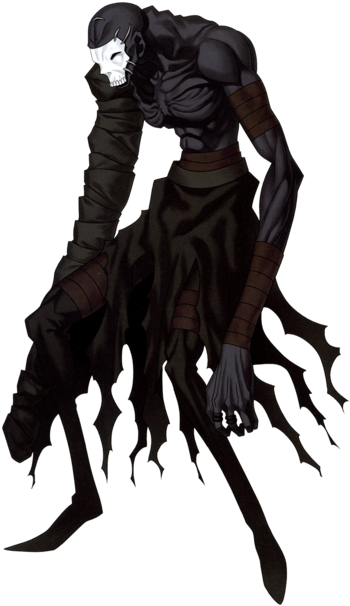 "It looks like your weapon is a projectile weapon as well. Would you like to try a match?"

An Assassin-class Servant who was meant to be summoned for the Fuyuki Holy Grail War, but was denied because Caster broke the rules and called in her own Assassin. He is only summoned in Heaven's Feel by Shinji and Sakura's grandfather Zouken Matou in order to take the Holy Grail for themselves and grant their shared desire for eternal life.

Like all Assassins, he is a master of moving about undetected and prefers to fight using thrown knives. His Noble Phantasm is a curse known as Zabaniya: Delusional Heartbeat. 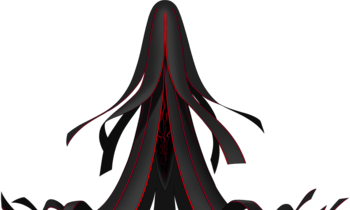 IT IS NOT ENOUGH

The Shadow is a horrifying pseudo-Servant tied to Zouken Matou that appears in Heaven's Feel. It devours anything that it can, though its source and origins are enigmatic. It does not seem to be a truly sapient being and is instead ruled by its hunger.

The Shadow is a particularly spoilery entry in the story, so beware. 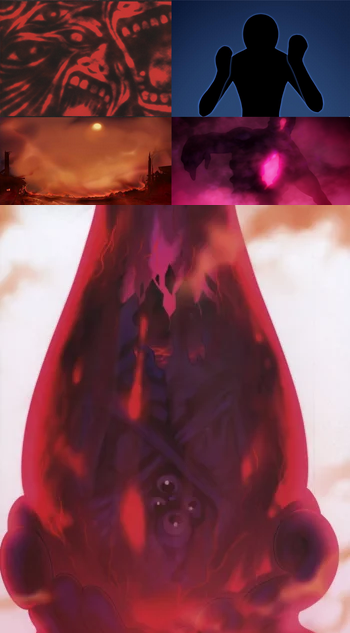 Clockwise from top left: Aŋra Mainiiu's form as All the World's Evil, Avenger's shadow form as a Servant, the Grail partially incarnated in the Unlimited Blade Works anime, the fetal Beast of Retribution in Heaven's Feel, the effect of the Grail's black mud

Aŋra Mainiiu is the Eighth Servant, belonging to the Avenger class, and a holdover from the Third Holy Grail War. It was once a man living in the 6th century Middle East, chosen to be persecuted and tortured by his people as the incarnation of "All the World's Evil". His peoples' veneration of him as such enabled his soul to become a pseudo-Heroic Spirit upon death. During the Third Holy Grail War, the Einzberns summoned him as a Servant while trying to summon the Zoroastrian God of Evil Aŋra Mainiiu, who they mistook him for. Avenger was slain due to his abysmal weakness, but when his soul was taken into the Greater Grail, it granted the wish of the people who had sacrificed the man and transformed his soul into the incarnation of All the World's Evil. Contained within and corrupting the Greater Grail, Aŋra Mainiiu waits to be reborn so that it can fulfill its own desires: the destruction of humanity.

While it appears in all three routes in the form of a corruptive black ooze, Aŋra Mainiiu's role in Fate/Stay Night is greatest in "Heaven's Feel", where it forms a Master-Servant pact with Sakura Matou, manifests through her as the Shadow, corrupts Saber and Berserker, and ultimately blackens Sakura into Dark Sakura.