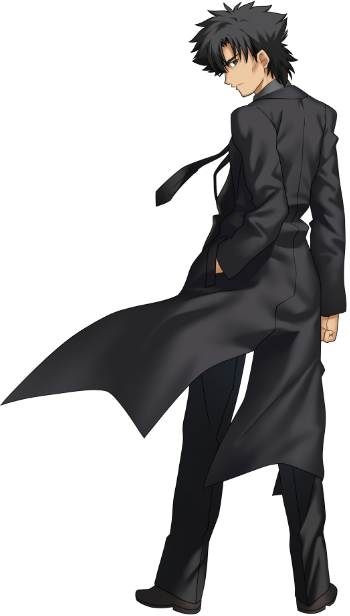 "Even if I am to carry 'all the evils of this world', it won't matter. If that can save the world, then I'd gladly accept it."
Advertisement:

Kiritsugu is the protagonist of Fate Zero and an infamous mercenary known as the Mage Killer. Despite his brutal methods, he actually has the best intentions of mankind as a whole at heart and enters into conflicts with the intention of ending them as quickly as possible before they can escalate. He stands far on the cynical side of the Sliding Scale of Idealism Versus Cynicism due to his belief that it is impossible for everyone in the world to be happy; in order to be a true hero, one must eliminate the destructive factors which would in turn threaten the survival of humanity as a whole. Killing one to save a hundred, dozens to save thousands.

Because he finds his normal methods insufficient due to the matter of scale, he chose to work for the Einzbern family, who allowed him to marry into the family. Ten years later, the Fourth Grail War begins and he and his wife Irisviel leave their daughter Illya behind in order to hopefully use the omnipotent wish granting abilities of the Grail to bring true peace. He is the Master of Saber, but the pair are so incompatible that they never speak to each other, leaving Saber to work with Irisviel instead while Kiritsugu operates behind the scenes.