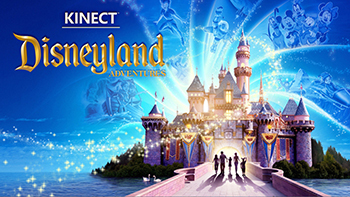 Visit the Happiest Place on Earth from the comfort of your home.
Developed by Frontier Developments and published by Xbox Game Studiosnote then Microsoft Studios on Kinect for Xbox 360, Kinect: Disneyland Adventures is a video game that has recreated a large amount of Disneyland Park circa 2011, with themed games based on the rides in place of many of the rides.
Advertisement:

In addition to minigames based on various Disneyland attractions, the game allows you (rendered as a child guest to the park) to meet, take photos of, bow to and dance with, high five, hug characters, and let characters sign your autographs. The characters, who are rendered and voiced as their actual selves instead of being costumed, also ask you to do favors. Also, you can see recognizable rides and locations.

This game is sort of like the classic Capcom game Adventures in the Magic Kingdom, but this time set in Disneyland circa 2011. The basic concepts are there: you can walk around the park, there are people who ask you to do favors (well, answer trivia questions), you can see recognizable rides, meet Disney characters, and the attractions are levels in the game that all play differently from each other. Kinect: Disneyland Adventures seems like that game's concept fully realized. You explore a far larger, more convincing Disneyland that's modeled after the layout of the real place and has lots of people in it.

The game was remastered and re-released on Xbox One and Windows 10 under the Kinect-free title of Disneyland Adventures on October 31, 2017. The remaster, which was handled by Asobo Studio, features 4K resolution support, HDR visuals, and finally adds traditional controller support with either an Xbox One controller or (on Windows) a mouse and keyboard setup (although the Xbox One version also supports its Kinect peripheral, as well). Steam and retail disc versions were released later on September 14, 2018, adding support for Windows 7, 8, and 8.1.

Attractions that the minigames are based on
Advertisement:
Meet-and-greet characters found in the park
Themed lands where they can be met are in parentheses. Characters who only appear in the minigames should not be added, since they are not available for meet and greets.