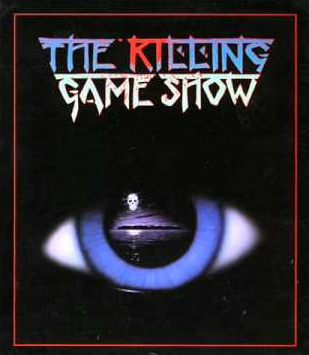 "We got a hot one for you."
Advertisement:

A 1990 title developed by Raising Hell Software (later known as Bizarre Creations) and released by Psygnosis for the Amiga and Atari ST, later ported to the Sega Genesis/Mega Drive under the title Fatal Rewind, at its core, The Killing Game Show is just what it is, a Deadly Game.

The premise of the game is simple: get to the top of the stage to advance. However, HALF's (Hostile Artificial Life Forms) are released into the stage to impede progress. The biggest danger, however, comes from the DOLL (Deadly to Organic Life Liquid) that is constantly being pumped into the stage after the beginning of stage countdown finishes. Touch it, and die instantly. There are a multitude of weapons and tools to use, including keys to unlock doors and a liquid freezer to stop the rising DOLL, and knowing how to use them will save you.

The backstory of the game is as follows: In the late 21st century, incarcerated criminals are given a shot at freedom by playing the game. However, they are stripped down to their vital organs and nervous systems, then placed into a machine armed with a simple cannon. If anyone can make their escape from the 16 pits of death (cylindrical pits built into eight custom satellite moons, two pits per moon/level), they get their life back. As for anyone who ends up dead... well, onto the next challenger.

The actual main character of the game is a criminal named Carl. Part of a Freedom Fighter group working to displace the local government, after he is caught during a police raid due to a suspected Mole, he meets up with an old friend of his, who tells him they're going to be forced into the above mentioned game, which nobody's come out from alive, as an example. Carl is then determined to win the game, since it would potentially mark him as an international hero, and help give enough leverage to overthrow the government.

The Sega port, Fatal Rewind's story is somewhat less harsh, as it follows the story of a man trying to get money for his sick daughter's operation. This version was published by Electronic Arts, and has two levels cut from it due to space limitations on the Genesis.

Noticeably, there was a rather unique feature: should the player die, they will watch the AI take them through the same path they took, right up to their death. This can be fast-forwarded with the corresponding key or button, and you can take over manually to stop the replay and potentially avoid making the same mistake twice.

The gameplay as a whole is easy to pick up, but it becomes Nintendo Hard Very quickly. Extra information on the game can be found here.