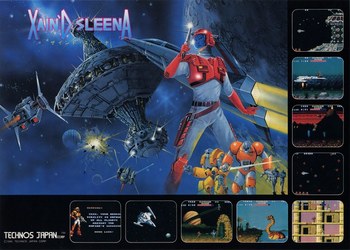 Xain'd Sleena is a Japanese arcade game produced in 1986 by Technos Japan that was exported by Taito as Solar Warrior in USA and later on ported as Soldier of Light with more or less success to other platforms as the Amstrad CPC, the ZX Spectrum, or the Amiga among others.

In this game you control Xain'd Sleena, a bounty hunter who must free five planets ("Cleemalt Soa", "Lagto Soa", "Cleedos Soa", "Guwld Soa", and "Kworal Soa") of the same star system of the invasion of the evil Dristarg empire... and that's all the plot. Even the name of the invaders is only revealed when you clear the end stage. While fighting on planets he's protected by a Powered Armor, armed with a laser rifle that can be enhanced with PowerUps released by some enemies, and uses rocket-powered boots that allow him to Double Jump, but after defeating the boss and destroying with a bomb the Imperial base he'll move from one planet to another with his starship... after you've fought the Imperial warships that guard the world, later on their Mothership, and finally their movable fortress in the last stage.

The most noticeable feature of this game is to be both a platformer (the planetary stages) and a side scrolling shoot'em up (the space ones), as well as in the original version the relative freedom of play it gave, as you could go to any of the five worlds and clear them in the order you wanted. (The sixth and final stage, the Imperial space fortress, is not unlocked until you've cleared the five others.) This was unfortunately lost in Solar Warrior as well as in other ports, where you play in linear fashion from the easiest planet to the hardest one. Other changes were to replace the text of the start screen, removing "Xain" and putting you in charge to defend not all planets but the Solar System instead, and to change the names of the planets from invented ones to Real Life ones (in the above's order: Saturn, Venus, Jupiter, Mars, and Neptune).