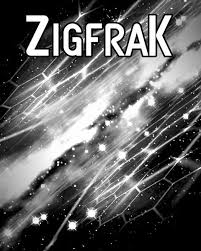 In the far distant future, humankind made contact with an advanced alien civilization known as the Xenoids. Their intentions were far from friendly however and soon the people of the Nautilus galaxy were trust into an era of martial law where security became the top priority; often at the cost of individual liberty. Facing this growing oppression, many left their home world of Gaia and the now totalitarian empire of the Enforcers.
Advertisement:

These pioneers were the Freerunners, those who sought freedom and a new life at the edges of human controlled space. They were forced to defend themselves from the pursuit of the Enforcers and the looming presence of the genocidal Xenoids in a tripartite civil war that continues to this day. As a pilot for the Freerunners you have enlisted to defend your settlements against threats both human and alien in nature.

Zigfrak is a space-based Action RPG, released on December 13, 2013 for PC. It features missions, exploration, and crafting, with an emphasis on loot and over-the-top items. Enemy ships explode like loot piñatas, spewing forth useful pickups.

The game employs subtle humor to poke light at a dark situation — a human civil war on a galactic scale, complicated by the invasion of technologically superior aliens. During the campaign, players encounter clues and artifacts which could reveal ancient secrets of humanity.