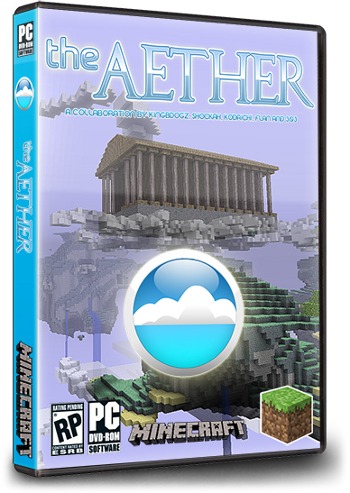 The Aether is a very large Game Mod for Minecraft, being considered the biggest and best before more mods of a similar variety took its place. It takes the un-included sky dimension and expands it into something worthy of its own game, and acts as an opposite to the Nether. Whereas the Nether is pockets of sky surrounded entirely by rock, the Aether is just the opposite — pieces of land surrounded entirely by sky, with no water ocean. The mod was created by a collaboration of Kingbdogz, Flan, Kodaichi, Shockah and 303.

What makes The Aether a huge mod is not just its added terrain generator (there are plenty of terrain generator mods out there). It's also an entirely different geology, with its own unique rocks, its own unique soils, etc. And it has a different ecosystem as well, with original mobs (animal creatures) that spawn only in the Aether. And there are three tiers of dungeon (Bronze, Silver, and Gold), each with a boss battle.

is currently in version 1.04_01, and works on Minecraft version 1.0.0. However, the download link is down, and must be found elsewhere

The development team is currently working on a radically improved version of the mod that will be functional with SMP. An Alpha version is available here.

You can see their progress on the Aether Facebook page.

In August 9, 2014, the Aether mod went through a Continuity Reboot of sorts, returning as the Aether II: Genesis of the Void. It was intended as a continuation of the Aether, adding and retooling several new and existing items as well as an expansive lore detailing the story behind the Aether's existence.

Around January 14th, 2018, in an attempt to revisit the feel of the original Aether, The Aether Legacy mod was launched, porting the original Aether from its final update in 1.2.5. to Minecraft version 1.12.2 with multiplayer finally becoming an option.

The tropes on this page are specific to The Aether. For tropes that pertain to Minecraft in general, see that page.