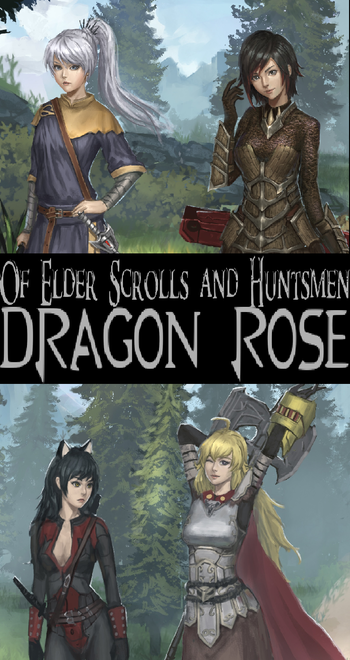 A fanmade picture made into a title card
Advertisement:

Team RWBY finds themselves in a strange, new world where Grimm are nonexistent and magic is commonplace. They journey to find a way home, but along the way are caught up in several ancient prophecies and must save this world they find themselves in. As time goes on, they adapt to the dangerous land of Skyrim and fight against its foes be they small, large, or godly.

"Of Elder Scrolls and Huntsmen: Dragon Rose" is a RWBY / The Elder Scrolls crossover story by Jesse K, with help from xTRESTWHOx and Naan Contributor. The story stands out for its extreme devotion to the lore of both series, especially on the Elder Scrolls side of the cross, the inclusion of lore-friendly mods, and the division of the various questlines between the four members of Team RWBY.

This story can be read in SpaceBattles