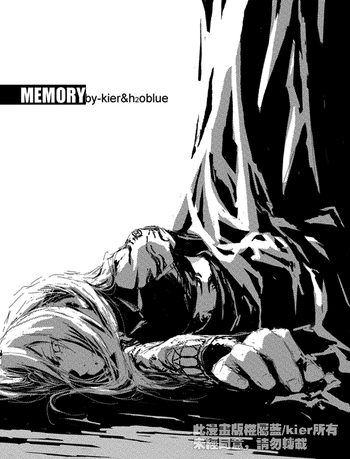 You won't get to see the tears I cry... Monster, how should I feel?
Advertisement:

Fullmetal Alchemist: Bluebird's Illusion (鋼の錬金術師［青鳥の虛像］ Hagane no Renkinjutsushi: Aotori no Kyozou) is a doujin-soft released in 2004 and created by Neoland Ocean-X, which is believed to be four college students and Fullmetal Alchemist fans in China. Based on Fullmetal Alchemist, specifically the then-still-ongoing manga and its 2003 anime adaptation, it is an interactive game with four different endings.

Five years after failing to revive Trisha Elric, Edward Elric is living a peaceful life in Central, Amestris after succeeding in bringing his brother Alphonse Elric's body back. But there is something wrong with Alphonse's body - it starts disappearing. Edward has to work with the Homunculi to fix this.

It is rumored that there are only 100 professional copies of this game in the world; supposedly, its manufacture was blocked because it violated copyright for profit. However, copies can be easily found to download from the internet. All copies of the game are in Chinese, which could make game play hard for people who don't read Chinese; but, as of August 2018, there's a complete English version by an independent translator.

An English-translated remake by another fan group known as Bluebird's Illusion: Rebuild was announced in 2012, but is still in the works.