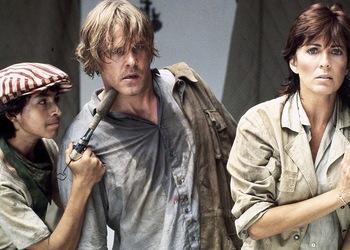 Set during the Nicaraguan civil war in 1979, the film follows three US journalists — photographer Russell Price (Nolte), TV reporter Alex Grazier (Hackman), and radio reporter Claire Stryder (Cassidy) — who are sent to cover the events. The rebels against the Somoza government are led by someone named Rafael, who is never seen but whose face is shown everywhere. Russell wants to get a picture of Rafael because because he thinks it's a good story, but it turns out things are a lot more complicated than that. Also, while Alex and Claire were once married, they've now split up, and she and Russell end up falling in love with each other.

Not to be confused with the video game, this was one of a number of films made in the 1980s about various conflicts around the globe from the point of view of the reporters covering them, such as The Year of Living Dangerously, The Killing Fields, and Salvador.