Film / The Center of the World 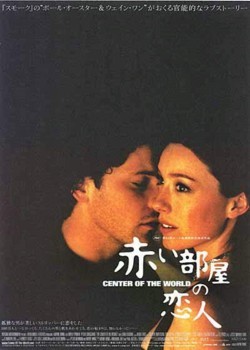 The Center of the World is a 2001 drama starring Molly Parker and Peter Sarsgaard, directed by Wayne Wang (Chinese Box and The Joy Luck Club).

Richard Longman (Sarsgaard) is a dotcom millionaire who has amassed his fortune on the web, but is genuinely lonely and looking for companionship. A chance encounter with a woman named Florence (Parker) leads her to reveal that she's a stripper at a nearby club called Pandora's Box. After Richard visits her there, he offers to give her $10,000 in order to spend several days in Las Vegas with him. She agrees, under the condition that they avoid talking about personal feelings, don't kiss each other on the lips, and that there will be no intercourse.

Naturally, this all gets thrown out the door soon after. Complicating matters is Florence's friend, Jerri (Carla Gugino), who throws a wrench into the mix by showing up unannounced and making life difficult for both of them. Richard and Florence soon find themselves developing feelings for each other, but the matter of their prior arrangement leads to an emotionally-charged ending to their weekend.

The film has much in common with other "Hooker with a Heart of Gold" films such as Pretty Woman, and was produced independently and released in a small number of theatres.