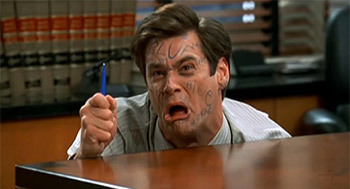 "The goddamned pen is BLUE!"
Advertisement: