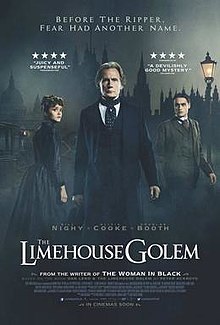 Before the Ripper, fear had another name.
Advertisement:

It's 1880, and a plague of mysterious murders has gripped London in fear. The crimes are noted for their brutality and seeming randomness. Due to certain calling cards, the killer has been dubbed the Limehouse Golem. It's up to a Scotland Yard detective to stop the madness.