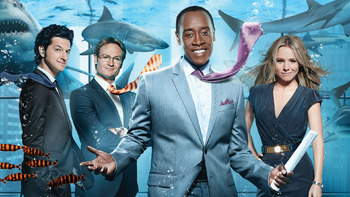 Hou$e of Lie$ is a Showtime original series adapted from the nonfiction business book House of Lies: How Management Consultants Steal Your Watch and Then Tell You the Time by Martin Kihn. It follows Marty Kaan (Don Cheadle), a partner at a management consulting firm, and his three underlings: Clyde Oberholt (Ben Schwartz), Doug Guggenheim (Josh Lawson), and Jeannie van der Hooven (Kristen Bell). Kaan is a lonely womanizer with a sociopathic ex-wife Monica Talbot (Dawn Olivieri), also a management consultant. Kaan and Talbot have one son together, Roscoe, an exuberant elementary school student with transgender identity issues. Kaan has sole custody, though his father, Jeremiah (Glynn Turman), a retired therapist, lives with them and serves as a co-parent.

Kaan's firm, Galweather & Stearn, is based in Los Angeles, but frequently deploys Kaan & co. to New York City and other US destinations to woo high-profile clients. Through various time-pressured meetings and well-executed PowerPoint presentations, Kaan and his team hoodwink their clients into employing them for outrageous amounts of money. After days of constant lying, the team spends their nights partying and having lots of sex.

As the series progresses, there is less focus on the teams getting clients, and more on character development. The central plot in the first season is a 'merger' (more like a hostile takeover) between Galweather & Stearn and Metro Capital, the client that was wooed by the Pod in the Pilot. Marty's relationships with his subordinates and his dysfunctional family also come into play, with him sacrificing his personal life for his job. The second season had ongoing stories involving a big deal in Las Vegas, along with a lot more interoffice politics. Season 2 also reveals a lot more of the Romance Arc between Jeannie and Marty, which continues until the end of the series.

Season five was the series' last. The finale was notable for being filmed on-location in Cuba, the first US production to be filmed in the country since the Cuban embargo was lifted.