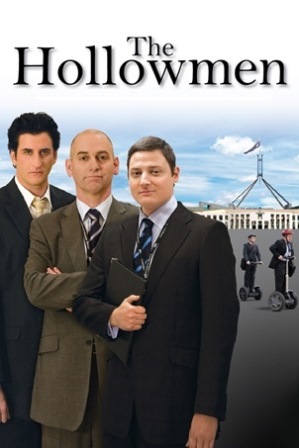 "Have we achieved anything at all for the Australian people?"
"We don't vote for them, we don't even know their names, and we're not sure what they do. But they wield enormous influence. They are the power behind the power. They are 'The Hollowmen'."

The Hollowmen is a satirical Australian Government Procedural from Working Dog Productions, arguably the Land Down Under's answer to modern political comedies like The Thick of It. It follows Only Sane Man David "Murph" Murphy, head of a (fictional) political advisory group called the "Central Policy Unit" that was personally set up by the Slave to PR Prime Minister to help him get re-elected.

Utopia (2014) can be considered a Spiritual Successor.

Not to be confused with The Hollow Men, which is a poem by T. S. Eliot.