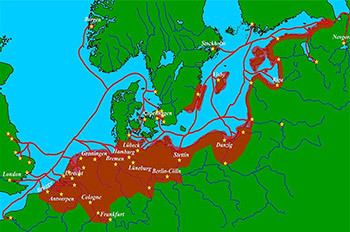 Nothing to do with sports, the Hanseatic League was an economic alliance of cities centred around the Baltic and North Sea coasts of Europe from the 13th century to the 17th century, specifically Northern Germany, Estonia, Latvia and Lithuania's modern borders. It began with an alliance between the Germanic cities of Hamburg and Lübeck; other key locations included Lüneburg, Bremen, Rostock, Danzig (now Gdańsk) and Riga, but also cities as far inland as Cologne, Berlin, Magdeburg and Krakow.

Designed to provide protection for mutual economic interests, they established trading posts as far apart as London and Novgorod (not to be confused with Nizhny Novgorod). They provided protection against pirates, trained harbour pilots and had periodic diets (that's assemblies). They were pretty protectionist and liked to get monopolies (a common medieval practice), and sometimes engaged in military warfare. In their heyday in the 14th to 15th century, they for instance took Copenhagen several times and won a say in who sat on the Danish and Swedish thrones. When they declined, Danish king Frederik II had them kicked out of Bergen in Norway to get a hold of power there.

Topping out about at 100 cities in the 14th century, the League gradually declined as its lack of central government (partly to avoid legal problems against a single entity) caused a problem against competition from Scandinavian merchants and the Dutch. This only got worse when the Reformation broke out and shattered the tenuous unity amongst the members. Once America was opened up and thus trade across the Atlantic grew more important than trade across the Baltic the league became an anachronism, and the death knell was sounded with the outbreak of the Thirty Years' War if not The Eighty Years' War. For decades all of Northern Germany became the rope of a brutal tug of tug of war, and the Hanse members were no different. Caught between the Hanse's traditional Dutch, Scandinavian, and British trade rivals on one side and a Habsburg Empire trying to subjugate all the German states on the other, the rich but protectionist, divided, and weak Hansa became The Chew Toy of countless armies and mercenaries while its' members split to one side or the other.

The league outlasted the war and managed to limp on for a few more years, but the last diet was held in 1669 and barely anybody showed up for the funeral. In 1862 somebody in what was then the budding Imperial Germany noticed the casket hadn't been buried and formally dissolved the dead league.

Its legacy lives on in a number of Dutch and German cities calling themselves "Hanseatic" (including the German states of Bremen and Hamburg, which have the official title of "Free Hanseatic City" and "Free and Hanseatic City" respectively). Many of those in present-day Germany have an extra H in their license plate codes (HB - Hansestadt Bremen, HH - Hansestadt Hamburg, HRO - Hansestadt Rostock and so on.) There is also the New Hanse, a voluntary association of cities that began in 1980. Membership in the New Hanse is open not only to former members of the old Hanse but also to former "kontore" (major trading partners) of the Hanse, with Novgorod being the largest of the kontore to join.

So what was all the trade that got those cities (or rather their upper classes) so rich? Gold? Jewels? Sometimes, yes. But mostly it was Fish, Salt, Salted Fish, pelts from the Slavic fringes of Europe and other relatively "common" goods which the Hanse made affordable to wide swaths of society.