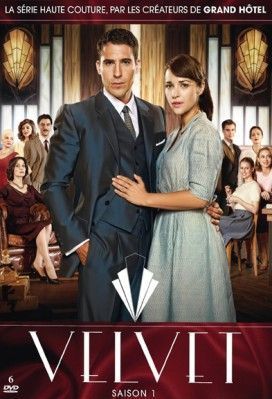 The show primarily focuses on the love story of Alberto Marquez, heir of Galerías Velvet, one of the most prestigious fashion houses in late 1950s Madrid, and Ana Ribera, who works as a seamstress there. As Alberto struggles to maintain Velvet's prestige and profitability, Ana works to make her mark as a fashion designer in her own right. The show also focuses on the personal lives of other employees, namely Alberto's friend and business partner, Mateo Ruiz; Alberto's scheming half-sister Patricia Marquez; sisters Rita and Clara Montesinos; Velvet's managers Blanca Soto and Emilio Lopez (who is also Ana's uncle); designer Raul de la Riva; and Plucky Comic Relief Pedro Infantes (and later, his cousin Jonas).

It ran for four seasons between February 2014 and December 2016; currently, it's available on Netflix for USA, Canadian, Latin American, and UK audiences.

In February 2017, it was confirmed that pay operator Movistar+ had acquired the Velvet brand from Atresmedia to launch a Spin-Off titled Velvet Colección, following the Velvet employees (both current and new) as they open a second Velvet branch and design school in Barcelona in the 1960s, which is also available on Netflix.