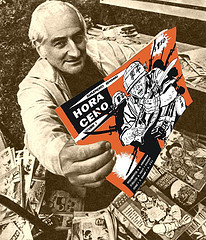 Héctor Germán Oesterheld (July 23, 1919 - circa 1977) was an Argentine writer of comic books. The “circa” above is because he disappeared in 1977, one of the victims of the military regime.
Advertisement:

He was a graduated geologist, and worked for YPF for some time. He soon abandoned that work, and wrote some child books. He soon jumped to comic books (or "historietas", as they are known in Argentina), and created the series Sargento Kirk and Bull Rocket for Editorial Abril. He saw the potential in the genre and started his own editorial, Frontera, and started with literary books about Kirk and Rocket. To negotiate his departure from Abril he gave up the right to Bull Rocket,note Abril kept publishing this comic for a time, with other authors and kept Kirk. Frontera published Anthology Comic series as well, such as "Hora Cero", "Hora Cero Semanal" and "Hora Cero Extra".

Frontera was a success, and introduced several new characters, such as Ernie Pike, Ticonderoga, Randall the Killer, Rolo el Marciano Adoptivo, Sherlock Time, etc. The most successful one, however, was El Eternauta, with Solano López. It was the story of an alien invasion set in Buenos Aires: so far all the comics were set in the US. The story lasted for two years, from 1957 to 1959, and was reedited several times, even abroad.

Frontera was closed, and Oesterheld moved to other editorials. Abril sold the "Misterix" comic to Yago, and Oesterheld created Mort Cinder in it, alongside Alberto Breccia. He also created other short-lived characters.

Since this point, his works became more politically loaded. He wrote a biopic of Che Guevara and started another about Eva Perón, but all the comics were seized by the military government and the project was cancelled. He wrote a remake of El Eternauta where the aliens were allied to the world powers, but it was cancelled so he rushed the ending. Far from just writing comics, he joined the terrorist organization Montoneros as spokeman. He wrote another comic for the Noticias newspaper, La Guerra de los Antartes, which was also cancelled when the military government closed the newspaper. He wrote a sequel for El Eternauta, but by this time he was on the run, fearing reprisal for his Montoneros membership. He did not even meet with Solano Lopez at this time, and explained the plots and scenes by phone. At some point he was captured and forcibly disappeared, but the story was completed.

There was a long legal battle after his death between his widow Elsa, editorial Record and artist Solano López over the rights of his most successful creation, El Eternauta.