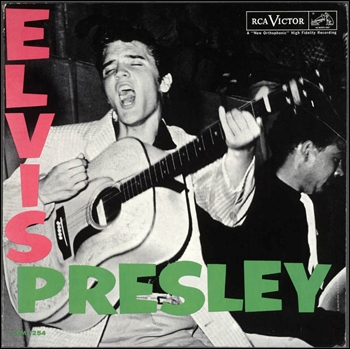 One for the money, two for the show, three to get ready and go, cat, go!
Advertisement:

Elvis Presley is the debut studio album by Elvis Presley, released in 1956. Historically famous for being the first rock 'n' roll album to become a best-seller.

It's generally considered to be Elvis' best, despite the original release not containing all of his most famous hits of this time period due to the common practice of not including most hit singles on regular albums (although a few months after the album's release, RCA Victor released all 12 songs of the album on singles, which was rather unusual). This explains why "Blue Suede Shoes" is about the only recognizable Elvis hit on this album. The 1999 reissue fixed this frustrating problem by adding more hits from this time period as bonus tracks, including "Heartbreak Hotel" and "Shake, Rattle And Roll". The 2011 Legacy Edition added several more, including "Hound Dog", "Don't Be Cruel" and "Love Me Tender".

An episode of the documentary series Classic Albums was dedicated to the creative process behind the album.