The Priestess of Genbu: Takiko Okuda 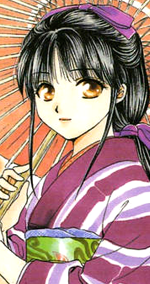 The Priestess of Genbu. Takiko had a quarrel with her father regarding the lost of her mother and tries to destroy The Universe Of The Four Gods book which he had just completed its translation; resulting Takiko being absorbed into the book and becoming the designated "Priestess of Genbu."

She chooses to summon Genbu in order to be useful to other people and to bring back her dead mother. Upon learning what summoning Genbu actually entails, she still decides to do it to save Hokkan.

Unfortunately, her will isn't strong enough to fight Genbu and she dies with only two wishes fulfilled. Her third wish is fulfilled by the prayers of Hokkan's inhabitants, that she and Rimudo find each other again and live happily. 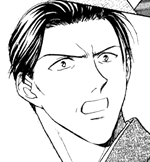 A well-known scholar and writer who specializes in Chinese literature and history. He tracked down the original scroll of The Universe of the Four Gods and translated it into Japanese, in hopes of being able to use the power of wishes contained in the story to heal his sick wife Yoshie.

Seeing that Takiko is about to painfully die by Genbu's possession, he stabs himself in the heart while holding the Book in his hands, effectively killing himself and her at the same time. 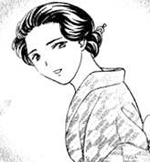 Takiko's mother and Einsuke's wife. She is suffering from tuberculosis and recently moved to her hometown of Iwate in Morioka.

She dies of her illness in the first chapter. 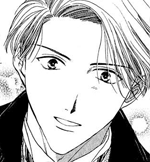 As per Einosuke's last will, Takao is given The Universe of the Four Gods for safekeeping, and if possible, disposal. 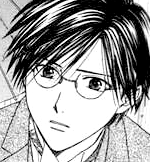 An acquaintance of Takiko's family, who has previously cared for her mother. He studied to become a doctor and has graduated from an elite university back in Tokyo. He arrives in Iwate to pay his respects to Yoshie and to ask for Takiko's hand in marriage.

While Takiko initially agrees, she eventually breaks the engagement and Oikawa returns to Tokyo.

Takao Osugi's 8-year-old daughter. She will eventually become the Priestess of Byakko, after her father inherited The Universe of the Four Gods from Einosuke.

The Seven Celestial Warriors of Genbu 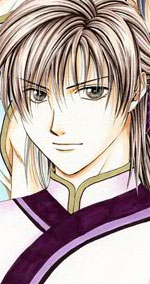 Born Rimudo Roun, Uruki was a member of the royal family of Hokkan, but was deemed a curse to the monarchy according to a certain prophecy. Hence, he was forced into flee in secret since birth, pressed with criminal charges along the way, and has been on the run throughout his life until he met Takiko.

His Celestial Mark is the Chinese character "Woman," located on the center of his chest. As a Celestial Warrior, he has the ability to freely control wind, but it comes with the requirement of gender-flipping into a woman due to his birth gender being male. 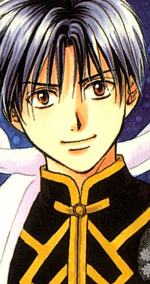 Tomite was a bounty hunter attempting to prey on the then serial killer, "Fuuzanki Rimudo" Uruki since Uruki's disappearance from his execution ground, but was prevented by Takiko through her "Priestess Aura." After a couple of events throughout Takiko's first few days in Hokkan, Tomite reluctantly became Takiko's first recruited Celestial Warrior to accompany her in search for the rest of the Genbu Warriors, making him the first non-love-interest Celestial Warrior in the Fushigi Yuugi franchise to accompany their Priestess the longest in her jouney. Tomite also made a clear note to Takiko early on that he knew the identity of the Celestial Warrior Hikitsu, but was unable to locate his whereabouts, which makes the reunification of Tomite and Hikitsu an important arc of the story; especially to those who've already read Fushigi Yuugi.

His Celestial Mark is the Chinese character "Void/Emptiness", located on the back of his left shoulder blade. As a Celestial Warrior, he's The Lancer and The Heart of the group; holding the power of ice. 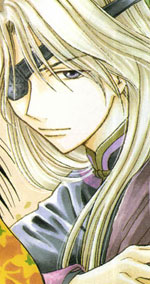 When Takiko encountered him, he was in the position of an exiler banished from his tribe, discriminated by his countrymen due to the combination of his tribe fearing the superstition of the Priestess of Genbu and her Celestial Warriors being the sign of apocalypse to the land; topped with his gifted celestial powers for his harsher boot. Therefore, Hikitsu comes off as a bitter person who distrusts his countrymen, and doubts the value of saving his country by the time of their Priestess' appearance.

). The character is horizontally flipped due to it's ability purpose. located on his right eye, replacing his eye's iris and pupil. As a Celestial Warrior, Hikitsu serves as the voice-of-reason and tactician of the group; holding the power of water. note ...with many other abilities to play along the way. 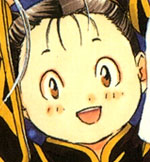 Born Zaraa Erutai of Tooru County, Hokkan. At the tender age of 12, Hatsui's the youngest Genbu Celestial Warrior on the team.

Hatsui comes from a family of herbal farmers who died when he was very little, and has since carried the same job his parents did for survival. His powers awakened while being bullied by his townsmen one day when he was 9, injuring them; leaving him horrified and ran away in hiding, only to be locked up under the surveillance of an assassin named Feng to be brainwashed in using his powers for her own offensive usage.

His Celestial Mark is the Chinese character for "Room" located at the bottom of his left foot. As a Celestial Warrior, Hatsui's the Tagalong Kid of the group, and holds the power of iron. 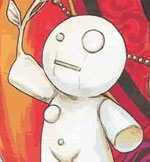 Namame is a Celestial Warrior born as a tiny piece of Hokkan's holy material, The Seimei Stone; making it a rock spirit. Word of God has made clear that it has no gender.

Namame has always wanted to befriend humans, but all either ran away or attack it in fear of it's appearance; making it distrust in humans, and usually resort to self-defense whenever a human approaches it. It wasn't until Anlu the Oracle befriended it that it learned how to slowly trust in humans again.

It's Celestial Mark is the Chinese character for "Wall" located at the back of it's head. As a Celestial Warrior, despite it's "true size," Namame's the The Big Guy of the group and holds the power of manipulating earth...which of course, includes itself. On the road, it is usually kept alongside with either Hatsui or Hikitsu due to it liking the two members the most. 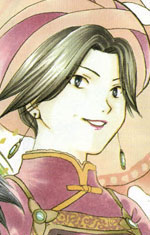 Born Talma (Taruma) as a child between two staff members of the Hokkan Empire, Inami started serving the royal family of Hokkan since she was 8 years of age. After wedded a man serving as a militant to their empire and was expecting a child, she was forced to flee from the palace soon after her husband was labeled a traitor. Out in the cold winter and with her Celestial Mark awakened right on her lower abdomen, she lost her child to the above harsh conditions. She was later found and cared for by a brothel madam named Shunu, and has stayed within her facility to help her run her brothel business ever since. Inami later moved their brothel business down to the country of Konan due to Hokkan's climate change, and it was there where Takiko has encountered her.

Her Celestial Mark is the Chinese character for "Ox" located on her lower abdomen. As a Celestial Warrior, like Hikitsu, she also serves as a voice of reason, and parental figure towards her teammates; she holds the power of Prehensile Hair. 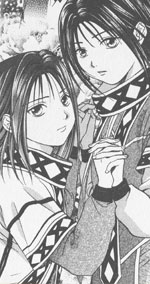 The Celestial Warrior Urumiya is "split" between a pair of identical twins. Younger twin Hagas holds the upper writings of the Chinese character, while elder twin Tegu holds the lower half of the character.

The twins were born into Hokkan's minority nomadic tribe—The Urutai Tribe, which were the sole tribe within the entire country to firmly hold the faith of Priestess of Genbu and her Celestial Warriors. Therefore, the twins particularly Tegu, grew up with full support from their tribe members in spite of Parental Abandonment at an early age. But all things turned downhill when Tegu was abducted by the Empire, and Hagas soon out of revenge, left their tribe in search for his brother.

Their Celestial Mark is the Chinese character for "Rooftop" note As in the original Chinese celestial meaning. The contemporary Chinese meaning for this character means "Danger." Which was used as a Double Meaning in context. located between their brows. Their powers goes two-ways, Hagas holds the ability to absorb the powers of other Celestial Warriors to make them his own if he inhales their powers directly, while Tegu represses the powers of all Celestial Warriors (which includes Hagas' powers) when he exhales with his powers turned-on. 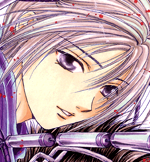 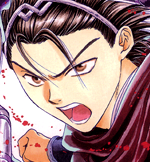 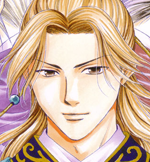 The rightful heir to throne of Hokkan. Temudan is working with Kutou from within Hokkan to protect the country from the upcoming glacial era and is intent on getting Uruki killed due to a prophecy where his son, the aforementioned Uruki, is supposed to kill him. He's suffering from a disease that slowly rots his body and half of his extremities have been replaced with prosthetics.

Temudan manages to get the throne back from his brother Tegiru only to be killed by one of Tegiru's followers shortly after, making peace with Uruki and giving the throne over to him.

The Odo Tribe
The Odo Tribe (Odozoku) is a tribe founded by the Urutai Tribe to shelter their fellow faithful Hokkan citizens from being persecuted for upholding their faith of believing in their Priestess of Genbu and her Celestial Warriors. Members have been preparing themselves with full military strength and multiple solid communication lines for years since the abduction of Urumiya Tegu in order to welcome, aid, and protect their priestess and warriors from their country's harm.

Advertisement:
From the Book 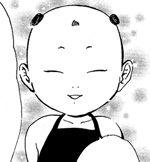 The divine god who looks over the Universe of the Four Gods. Unlike in Fushigi Yuugi where she gave the appearance of an old lady, here she portrays herself as a "little Chinese boy." Therefore, tropes below would proceed to use pronoun "he" for the convenience of the story. 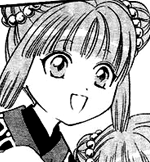 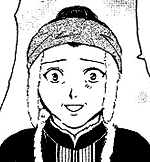 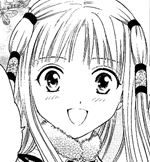 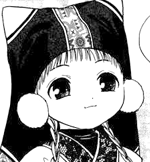 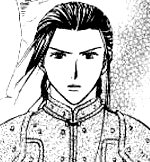 Voiced by: Kenichi Ono (Japanese, CD Drama)
Game Original Characters
The following characters only appear within the Visual Novel of the Genbu Kaiden Franchise, released on the PlayStation 2, PSP, and Nintendo DS consoles. Fushigi Yuugi Genbu Kaiden Gaiden: Kagami no Miko was treated as a Sidequest incident not long after Hikitsu joined in on the journey. But this game was heavily criticized by fans due to the unexplained absence of Hatsui, Namame , and even Hagas, who should've been part of the story regardless whether they are "qualified bachelors" or not. The developers later made a somewhat excuse in giving Hatsui and Namame a reason of absence, and yet, it still doesn't make sense. 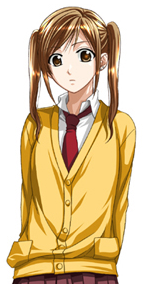 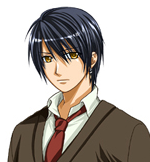 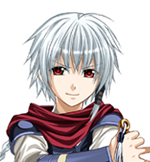