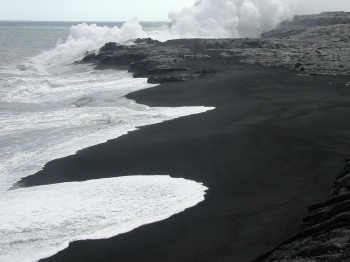 Pele, the goddess of fire, doing battle with her sister Nâmaka, the goddess of the sea.
"You can't go wrong mixing classic graphics in black and white. It's very Parisienne."
— Brad Goreski
Advertisement:

Black and white, respectively, the darkest and lightest values in visible light. While not being true colors, they contrast better than any pairs of actual contrasting colors, be it red and green, blue and orange, or yellow and purple (though these last two are considered the most similar to the black/white contrast in terms of color space). Consequently, black contrasted against white has a long history in symbolism. How this symbolism generally works varies from culture to culture— western societies generally view black as malevolent and white as benevolent, while in East Asia white typically has a more somber connotation. Regardless, the contrast between the two values is a universal source of symbolism, and as such is rife for trope fodder in media.

Similar to the Rule of Index caveat, just because "black" and "white" appear together in the name of the trope does not mean they fit this index. Nevertheless, compare Gray Tropes, Good and Evil for Your Convenience, Good Colors, Evil Colors. Not to be confused with the separate Black Index and White Index, which (though there is overlap) are about people of... color.