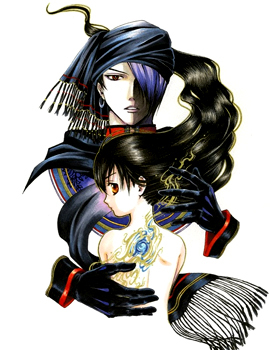 Fushigi Yuugi: Byakko Ibun (ふしぎ遊戯 白虎異聞?, Mysterious Game: The Curious Tales of Byakko) is a Japanese one shot manga written by Yuu Watase. It was published by Shougakukan's Monthly Flowers magazine in February 2015. A prequel to Fushigi Yuugi: Byakko Senki, it's set some time before the Priestess of Byakko, Suzuno Ohsugi, arrives to Sairou; it features two lonely and powerful people named Nirusha and Reipin, whose paths met by chance and chance their lives completely...

Note: Byakko Ibun is a prequel to the official story of the Byakko no Miko, Byakko Senki, which officially began in 2017. Therefore beware of MANY spoilers, marked or not.