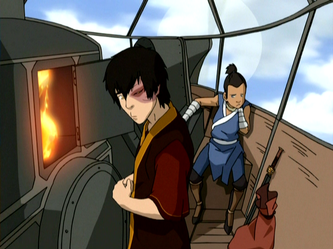 Sokka and Zuko begin an awkward team-up.
"How did you know who I am?"
"How could I not? You broke my niece's heart."
Advertisement:

Feeling keenly responsible for the capture of the invasion forces during the eclipse, Sokka decides to redeem his honor by rescuing his father. Accompanied by Zuko, he takes Zuko's war balloon to the Boiling Rock, the highest security prison in the Fire Nation.

Going undercover as guards, Zuko discovers that there are no Water Tribe prisoners currently at the Boiling Rock, but Sokka discovers that Suki is a prisoner there. Zuko's cover is busted while he is standing watch to let Sokka talk to Suki and he becomes a prisoner himself. To make things worse, the warden is Mai's uncle, who is none too happy with the boy who broke Mai's heart.

Sokka, Suki and Zuko come up with an escape plan but are overheard by Chit Sang, another prisoner, and are forced to let him in on the plan. While proceeding with the plan, Sokka and Zuko hear that some war prisoners are arriving the next day and decide to let Chit Sang and his friends go ahead with their plan, while they stay behind with Suki on the chance that one of the war prisoners is Hakoda, Sokka's father.

Mai gets dumped with a capital 'D'.

Mai gets dumped with a capital 'D'.