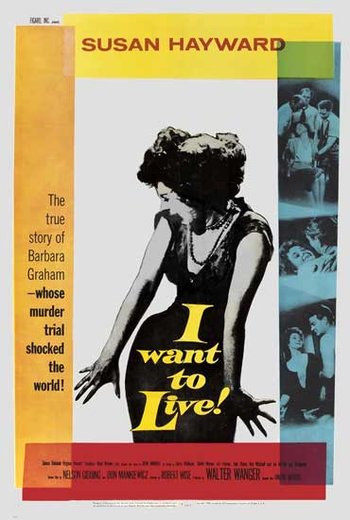 I Want to Live! is a 1958 Film Noir directed by Robert Wise, based on the (sort of) true story of Hooker with a Heart of Gold Barbara Graham and her failed endeavor to give up a life of crime, ultimately ending up on trial for murder.

According to The Other Wiki, the movie was adapted from articles and letters written by Pulitzer Prize winning reporter Ed Montgomery, who is also a character in the movie. Consequently, the film mercilessly satirizes the media and its tendency to treat truth as a secondary priority to entertainment, and the disastrous consequences it can have in regards to the legal system.

Other than that, best known for the fact that it earned actress Susan Hayward an Oscar for Best Actress in the starring role.