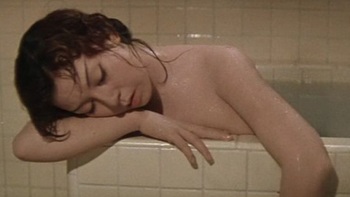 Kenji Kenmochi (Nakamura) is an elderly professor of antiquities, now semi-retired. Advancing age has robbed him of his libido and his ability to sexually satisfy his much younger and extremely good-looking wife Ikuko (Kyo). Kenji is going to young Dr. Kimora (Nakadai) and receiving injections, which are failing to restore his sex drive but which are pushing his blood pressure to dangerously high levels.

While treating Kenji, Kimora has been courting the Kenmochi's young daughter, Toshiko. One evening when he is visiting the Kenmochi home, Ikuko drinks way too much alcohol. She excuses herself from dinner, goes to the bathroom, and runs a bath, only to pass out while naked in the bathtub, fortunately with her head above water. As Kenji and Kimora pull Ikuko out of the bath, Kenji notes the doctor's reaction to his attractive nude wife, and more importantly, his own reaction to Kimora's reaction—the idea turns him on. Kenji hits on an idea: push his wife into an attraction with the handsome doctor, then use his own arousal at the prospect to revitalize his own sex drive.

Based on a Japanese novel called The Key. In 1983 the source novel was made into an Italian film titled The Key.