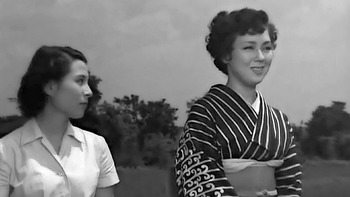 Older Brother, Younger Sister is a 1953 film from Japan directed by Mikio Naruse.

The setting is a small town that, despite seeming to be way off in the sticks, is actually only a short bus ride away from Tokyo. The story focuses on one particular family. Patriarch Akaza once had a prosperous business building earthen dams with stone, but now that concrete dams have become the standard in Japan, he is no longer in business and is a broken man. The family ekes out a living running a small snack shop, with Riki, the mother, usually being the one minding the store.

The older brother is Inokichi, who carves gravestones when he isn't drinking and carousing with prostitutes. Despite the English-language title of the film there are actually two younger sisters (the Japanese language lacks plurals). San is the "good girl"; she is going to nursing school. Mon (Machiko Kyo) is the "bad girl"; how she supports herself is left vague, but apparently at least in part she does so by accepting favors and money from men. This is problematic as the busybodies in the boring little village like to talk about Mon, and worse, Mon's reputation threatens Sen's romance with Taiichi, a local man. Worst of all, Ino is filled with rage about Mon's activities in Tokyo, and he takes it out on her whenever she visits.