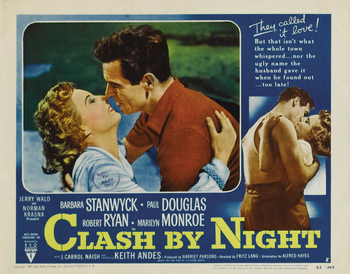 Clash by Night (1952) is a Film Noir directed by Fritz Lang.
Advertisement:

The film begins with May Doyle (Barbara Stanwyck) returning to her industrial hometown after 10 years of absence. She comes back and reconnects with her brother, Joe (Keith Andes) and his girlfriend, Peggy (Marilyn Monroe). A local of the town, Jerry D’Amato (Paul Douglas), has always had a crush on Mae and gathers up courage to ask her out. Mae knows they aren’t right for each other, but she accepts his eventual marriage proposal so she can finally settle down. The only problem is Jerry’s friend, Earl Pfeiffer (Robert Ryan), is the kind of man Mae always falls for.

This works shows the following tropes: