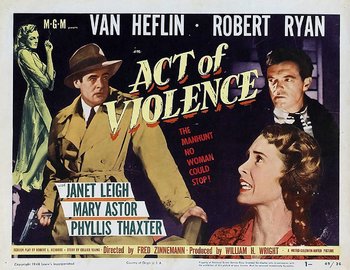 Frank Enley (Heflin) is living the life: he has a beautiful wife, Edith (Leigh), a comfortable home, and has a great reputation in his community. But the past is haunting him: Joe Parkson (Ryan) and Frank were pilots in World War II and were shot down and taken in as POWs.

During the two years of imprisonment, the horror of war pushed Frank to commit an unspeakable act of which Joe is the sole survivor. Now out for revenge, no act of kindness or reformation can stop Joe in his unrelenting quest to murder Frank.