Film / Sons of the Good Earth 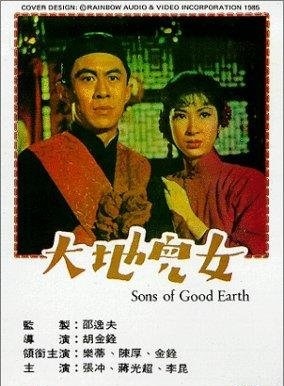 Sons of the Good Earth is a 1965 war drama and epic film produced by Shaw Brothers, set during the First Sino-Japanese War. Loosely based on the novel The Good Earth from Pearl S. Buck, with some Adaptational Name Change and more action scenes thrown in for good measure.

Set in 1937 in the outskirts of China, the story revolves around two lowly painters, Yu Rui and Lao San, the former who acts as a big brother figure to the latter. While painting the exterior of a city building one day, Yu Rui unintentionally interrupts the suicide attempt of He Hua (Betty Ting) - "Lotus" - as she tries throwing herself out of a window. Learning of the fact that He Hua was actually a brothel worker oppressed by her masters, Yu Rui decides to help her regain freedom. Despite unlikely circumstances, a romance begins between Yu Rui and He Hua, and they're eventually married... only for the Japanese invasion to occur a week later.

The director, King Hu, would have his career skyrocketing with his immediate next film after this one - the martial arts classic, Come Drink With Me.

Tropes of the Good Earth: