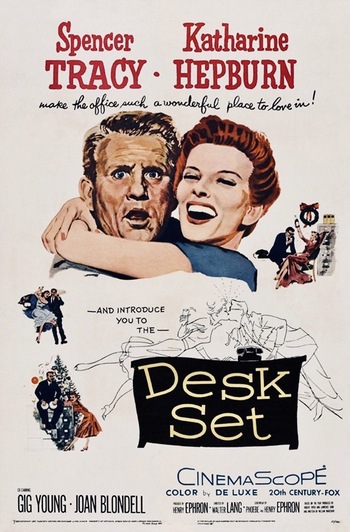 Desk Set is a 1957 Romantic Comedy film directed by Walter Lang, adapted by screenwriters Phoebe and Henry Ephron from the 1955 play The Desk Set by William Marchant.

Bunny Watson (Katharine Hepburn) is the head of the research department at a large broadcasting network in New York City. Richard Sumner (Spencer Tracy) is a "methods engineer" who is studying ways to use computers to make businesses more efficient. When he starts hanging around Bunny's department, she's convinced he's trying to replace her and her staff with a computer. She's sort of right...

This was the second-to-last movie that Spencer Tracy and Katharine Hepburn appeared in together, followed only by Guess Who's Coming to Dinner a decade later. Also in the cast are Joan Blondell as as Bunny's friend Peg and Gig Young as her longtime boyfriend Mike.