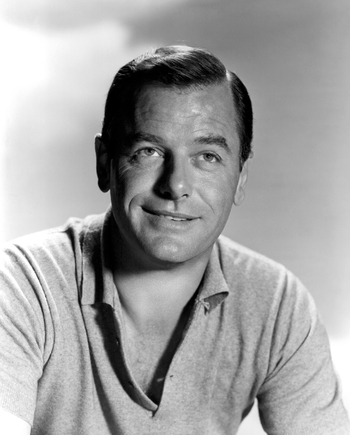 Born in St. Cloud, Minnesota and raised in North Carolina and Washington, D.C., Young studied acting at the famed Pasadena Playhouse and was discovered, along with George Reeves, by a Warner Bros. talent scout while appearing in a play. After getting signed with the studio he had bit parts in a number of films, in which he was either uncredited or credited as Byron Barr; in 1942 he appeared in The Gay Sisters playing a character named "Gig Young", and was so well received that the studio encouraged him to adapt that as his permanent Stage Name.

Known mainly for supporting roles, in particular for playing the Romantic False Lead in both serious and comedic films, Young won an Academy Award for Best Supporting Actor for his performance as a jaded dance-marathon emcee in the 1969 film They Shoot Horses, Don't They?.

Young was married five times, one of his wives being Elizabeth Montgomery of Bewitched fame. On October 19, 1978, three weeks after his fifth marriage—to a 31-year-old German woman named Kim Schmidt—police found the couple dead at home in their Manhattan apartment from gunshot wounds; it was determined that Young had shot his wife and then turned the gun on himself.