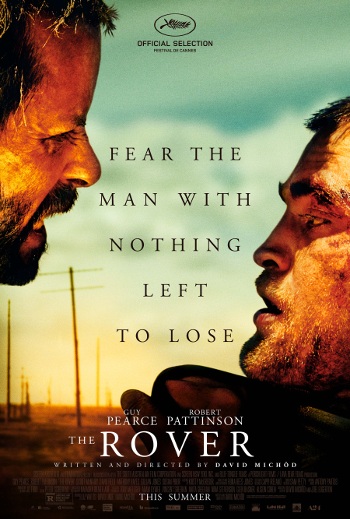 "I want my car back."
"What feeling do you have when you wake up in the morning? When your feet touch the floor? Or before that, when you're lying there thinking about your feet hitting the floor?"
Advertisement:

Opening ten years after an irreparable economic collapse, a trio of fleeing raiders led by Henry (Scoot McNairy) steal a Rover belonging to a man called Eric (Pearce). Pursuing the men, Eric soon crosses paths with Henry's dying younger brother, Rey (Pattinson), who was left for dead by the raiders. Eric gets Rey patched up and forces him to help track down the raiders in a seemingly pathological desire to get his vehicle back.

The Rover contains examples of: